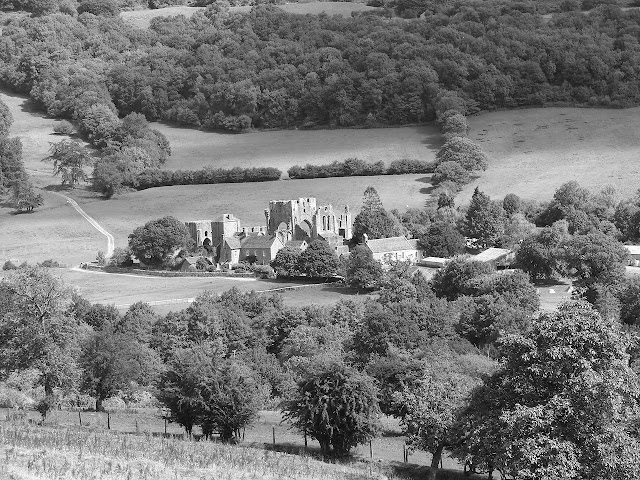 I will be commencing a full time PhD at the University of Exeter in September. Here is my research proposal; the landscapes and places that will be occupying my time, inspiring me and driving me to distration over the next three years. If anyone has any expertise, knowledge or interest in the subject matter outlined here I would be delighted to hear from you.

Monastic estates, in contradistinction to monastic buildings, have traditionally received limited attention from landscape archaeologists and historians and few previous studies have attempted to examine the subsequent evolution of these estates beyond the Dissolution within the context of their monastic period antecedents (Bond, 2004; Everson and Stocker, 2007). However, a number of more recent agenda-setting publications (Aston 2007; Austin, 2004; Bezant, 2014; Walsham, 2011) have offered new methodological and theoretical frameworks to begin to address this subject, thus providing the foundation, impetus and broader context for this proposal. Examining in detail landscapes associated with a number of monastic houses in the south-eastern Welsh Marches and tracing their later trajectory, this thesis will assess the impact and legacy of monasticism on the historic landscape up to the present day, stretching the chronological survey of such landscapes into the post-Dissolution era and bridging the gap between medieval and post-medieval landscape study.

Adopting an interdisciplinary and multi-layered approach to the landscape, the core emphasis on tracing and accounting for the physical changes evident within the study area will be supported by an examination of the shifting perceptions of cultural and economic value, of landscape meaning and memory, which such changes reveal or provoke (Cosgrove, 2008; Schama, 1996).  Consequently, conventional themes long dominant in landscape historical and archaeological discourse such as ownership and land management will be addressed, but interweaved with the discipline’s more recent interest in how places and landscapes are perceived, appreciated and codified in both the past and present (Johnson 2007; Whyte, 2009; Wylie 2007).

This research will be driven by a number of core questions:
The south-eastern portion of the Welsh Marches, encompassing the historic counties of Brecknockshire, Monmouthshire, Glamorgan and Herefordshire has been carefully selected for its high potential to address the specific research questions posed here (Burton and Stober 2013). This area contains a mixture of pays— of both upland and lowland, and champion and bocage landscape character — offering a variety of physical settings in which to explore the human dimensions of landscape creation over the long term (Leighton and Silvester, 2003; Rowley, 2001). The region was also colonized by a number of religious orders during the middle ages. This provides the context to examine the estate organisation of specific religious orders as well as the particular landscape arrangements of individual houses. The wider geo-political dimension at play in the region during the medieval period—for example the establishment of monastic estates as a symbol of Norman colonisation, power and control in a contested borderland—provides an additional dynamic to enrich discussion on the cultural impact of these landscapes (Burton and Stober, 2013; Rowley, 2001). There is also considerable variation in the post-Dissolution histories of these monasteries: some became ruinous, with their estates broken up, whilst others were converted into gentry houses with associated landscaped estates.  The area has long attracted the attention of the artistic community, opening up the opportunity to explore the monastic legacy underpinning the evolution of these landscapes as cultural, spiritual, and artistic touchstones (Andrews, 1999). Finally, reflecting the desire to trace development to the present day, many of the monastic estates are located in what are now designated spaces or countryside on the edge of post-industrial urban areas; terrains viewed through the contemporary lens of high heritage and ecological value, but also facing competing pressures for change.

An interdisciplinary approach will be adopted from the outset integrating topographical, archaeological and historical evidence supplemented by analysis of literary and artistic sources, oral histories and contemporary opinion.  Examination will be multi-scale, with general surveys of the whole area supplemented by three detailed case studies chosen to ensure a reflection of the range of complex landscape histories it contains (the short-list of monastic houses for the case studies are: Craswall, Dore, Goldcliff, Llanthony, Llantharnam and Tintern).  Criteria in their selection will include: monastic order; landscape character and pays-type; heritage and conservation designations and value (including economic); current ‘risks’ of landscape degradation and fragmentation; access and ownership considerations; and availability of archive and research materials.
Foundational to the research will be to categorize, record, and map monastic features in the case study landscapes (including religious buildings, farmsteads and granges, field systems, communication routes and other infrastructure). GIS will be used to integrate, analyse and present modern and historic maps and plans, aerial photographs and satellite images, place- and field-names, and data layers from HER and archival records.  A limited sample of targeted fieldwork will be conducted on key features, focussed on rapid field assessment and measured surveys.  Once reconstructed, the ‘monastic era’ features of the case study landscapes will be analysed to identify and catalogue post-Dissolution continuity and change: patterns of preservation, adaption and despoliation.

A dual approach will be taken to the analysis and comprehension of shifting perceptions of the case study landscapes, of how such places are envisioned and represented (Andrews, 1999; Cosgrove, 2008; DeLue and Elkins, 2008).  Written, artistic, and cartographical landscape descriptions and depictions—from monastic records, folkloric representations, the works of antiquarians and the Romantics, through to diverse twentieth and twenty-first century viewpoints—will be examined.  This will be supplemented by survey and interview of a representative sample of those who work in, manage and visit these landscapes, including: National Park staff, walkers on Offa’s Dyke National Trail, local farmers, artists and residents, visitors to heritage sites, members of local societies, and those involved in outdoor pursuits. Social media will be used to engage with on-line conversations relating to the spatial and thematic subject matter of the study.

Transcribed versions of documents from the monastic period, for instance Ecclesiastical Taxation (1291), Valor Ecclesiasticus (1535), Calendars of Ancient Deeds, Charter and Patent Rolls and other contemporary administrative and legal papers, will be reviewed for primary source references to topographical and tenurial information relating to the case study areas, as well as cartularies where they exist. Reference will also be made to antiquarian studies describing post medieval and early modern estates previously held by monastic houses in the study area, such as Beaumont’s A Tour throughout South Wales and Monmouthshire (1803) and Dugdale’s Monasticon Anglicanum (1655-1673). National and local archives and HER’s will be consulted to review archaeological reports, estate and tithe maps and other source documents. Ordnance Survey maps will be accessed digitally from the Digimap on-line resource. Aerial photographs and satellite imagery will be obtained from the RCAHM (Wales) and English Heritage’s on-line archive and Google Earth. A useful on-line research resource for the study will be the Monastic Wales web site (http://www.monasticwales.org/), which provides listings of primary and secondary sources for all monastic houses in Wales. Other sources will also help to identify patterns of perception over time relating to the case study landscapes, including the work and commentaries of artists and writers (ranging from Giraldus’ The Journey through Wales to Wordsworth’s locally inspired output, through to more contemporary observers such as Raymond Williams and Owen Sheers), local folkloric tales and visitor survey data published by heritage and conservation bodies.

More than just the passive subject of our gaze or the repository for archaeological features of clearly demarcated temporal periods, in the words of Robert Macfarlane (2012), “landscape is not something to be viewed and appraised from a distance” but is “dynamic and commotion causing”, a collective term for the diverse components “that together comprise the brisling presence of a particular place”. This proposal outlines a vision for a work which, though rooted in the established practices of landscape archaeology and history, demonstrates a multi-dimensional approach based on the study of landscape as just such a many layered construct (Fleming, 2008; Johnson, 2007). In this case, exploring these ideas through a regional examination of the topographical legacies of monasticism imprinted in the evolving realities and perceptions of diverse monastic estate landscapes over time.

Ultimately the aim is to provide a coherent narrative – a biography of both the real and the imagined – for these particular places with complex pasts and presents in order to help inform contemporary decisions on how they are managed, utilised and presented to the wider public on a landscape scale now and in the future. For this is an urgent need, now more than ever, as competing pressures of land use (agriculture, housing, energy supply, amenity and so on) play out across rural Britain and the cultural and economic value of ‘heritage assets’ is increasingly seen to be realised on a landscape rather than a fragmented site-based level (Fowler, 2004; Rippon, 2004).