"Is there no end to this accursed forest?" 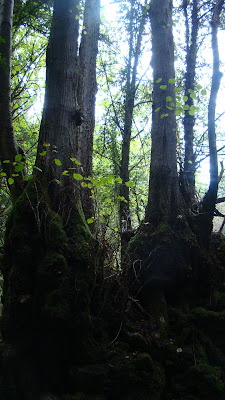 Back from a long weekend camping above the Wye Valley, on the edge of the Forest of Dean: "The very rim of England" (Roger Deakin, Wildwood).
As the visit was punctuated by the biblical downpours that have characterised this summer, a trip to Puzzlewood, with its network of rocky pathways winding through a dense woodland canopy, seemed appropriate.

The paths through the wood were laid down by the landowner in the 1800's and explore the rocky mini gorges known locally as Scowles, formed through the collapse and exposure of the cave systems that riddle the carboniferous limestone of the area; the result of natural erosion, and subsequently exploited for mining iron ore in the Iron Age and Roman period.

The wood, more recently used for atmospheric sylvan scenes in television series including Dr Who and Merlin, was an inspiration for JRR Tolkien in formulating his imagery for the dark and forbidding great woodlands of Mirkwood in The Hobbit.

The magical character of the woods results from a dense treescape of yew, beech, ash, oak and lime overlying the narrow rocky ravines; creating a dark and damp environment where mosses, lichen and ferns thrive and tree root systems encase the rocks in fantastical patterns.

Here are some images and words that capture the spirit of the place. 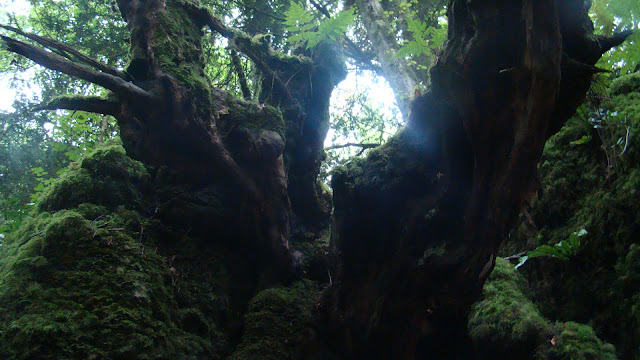 "Deeper into the forest it got darker, like a mineshaft" (Roger Deakin, Wildwood). 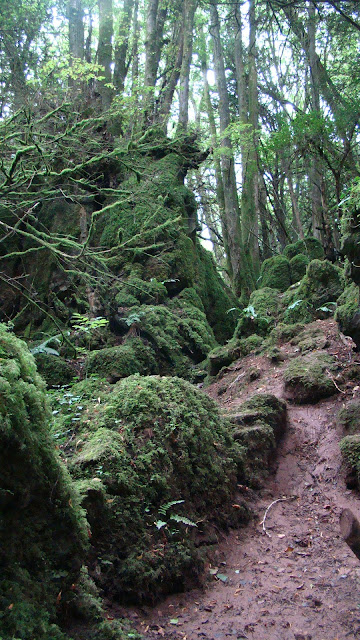 "As their eyes became used to the dimness they could see a little way to either side in a sort of darkened green glimmer. Occasionally a slender beam of sun that had the luck to slip in through some opening in the leaves far above, and still more luck in not being caught in the tangled boughs and matted twigs beneath, stabbed down thin and bright before them." (J.R.R. Tolkien, The Hobbit).

"The first grows in damper places...reared on the creeping dankness of the earth" (John Silken, Moss) 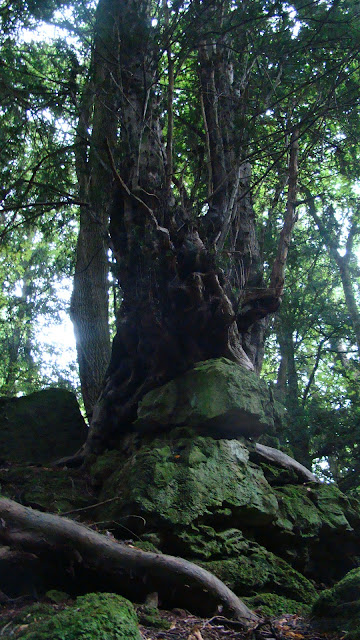 "The yew in British folklore tales is often invested with dark or magical associations" (Robert Bevan-Jones, The Ancient Yew). 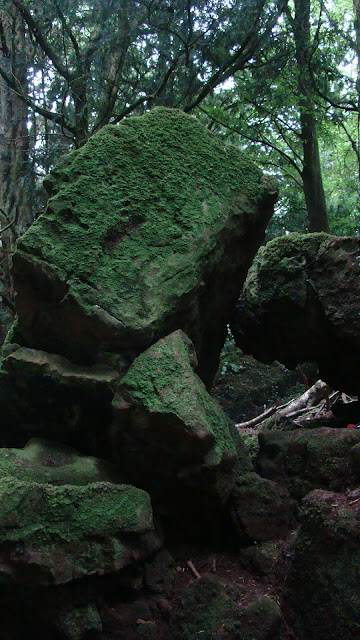 And from a few miles south, on an extant section of Offa's Dyke cresting the lower Wye Valley, the comforting light and airy beech woods that have colonised the eight century earthworks; a counterpoint to the gloom of Puzzlewood. 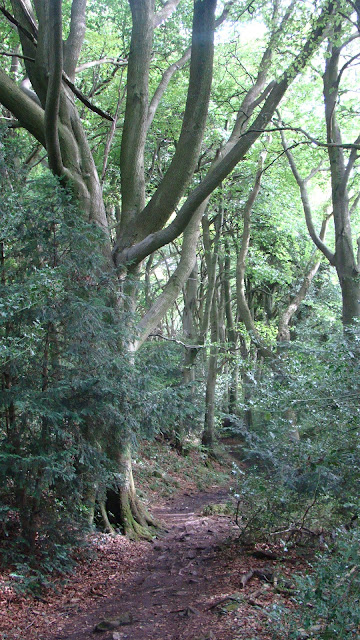 "About four days from the enchanted stream they came to a part where most of the trees were beeches. They were at first inclined to be cheered by the change, for here there was no undergrowth and the shadow was not so deep. There was a greenish light about them, and in places they could see some distance to either side of the path. Yet the light only showed them endless lines of straight grey trunks like the pillars of some huge twilight hall" (JRR Tolkien, The Hobbit).

"Nostalgia links the Old Forest of Middle Earth with the Wildwood of Kenneth Grahame, and its a link that goes back through Edward Thomas to the pre-enclosure woodlands of John Clare" (Richard Hayman, Trees). 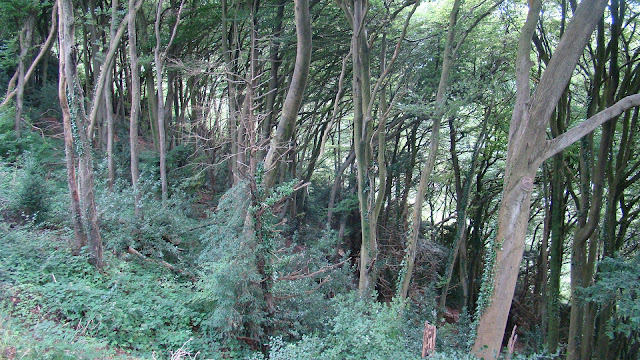 Walters, Brian, 1992 The Archaeology and History of Ancient Dean and the Wye Valley. Cheltenham: Thornhill Press

"Songs, like the grass, are evergreen": Landscape as a musical motif


“How do you soundtrack a city? Or a nation? Is there a score to be written for this green and pleasant land of song, our forever awe-inspiring country? How do you start to summarise the very sound of a place when – in just under two hundred years – one small border town is capable of producing both Edward Elgar and Fuck Buttons? You can’t, so you don’t even try. You follow your heart and you look for the defining moments in culture, the sounds that continue to resonate...

...Two hundred years ago Goethe said that architecture was like frozen music. Well in today’s Britain the inverse is true, music is the fluid architecture all around us.

The isle is full of noises. The soundtrack writes itself.”

Inspiring words from The Isles of Wonder soundtrack, summing up the strong and urgent relationship between music and the land and people of the British Isles: a subject matter rich in material but, perhaps, somewhat neglected compared to the analysis of landscape related art, poetry and prose.

I have, though, a slight wariness in writing a post on the theme of landscape and music. Partly because its such a personal interconnection: people will have their own favourite soundscapes of place in their head, on the car stereo,  their i-pod or at a festival: Hubert Parry/ William Blake's Jerusalem, a traditional folk standard, psychedelic wig-out or paean to the city. And also because Rob Young's Electric Eden: Unearthing Britain's visionary music is, in my opinion, such a tour de force; the inter-weaving of folk music, landscape, culture and more through a sweeping history of "Albion's soundscape" over the last 100 years or so.

In The Making of the English Landscape WG Hoskins memorably likens England's landscape to a symphony, enjoyable as an "architectural mass of sound" but more satisfyingly appreciated if the individual themes are isolated "to see how one by one they are intricately woven together"; a suitable entry point into the relationship between music, sense of place and landscape. And a deeply rich symbiosis this is. Hardly a song lyric exists without an allusion, however hackneyed or banal, to "river deep, mountain high" topographical and morphological symbolism. The default visual motifs for classical music routinely feature scenes of pastoral magnificence to complement both the epic or more contemplative sounds inside.

Curious old recording of radical Liberal anthem The Land, with even more curious video's from YouTube. Michael Foot's favourite political song (a fairly thin canon admittedly), its a rousing pro-land tax, anti-landowner call to arms, originating in America and adopted by Lloyd George's Liberal Party in the general election's of 1910.

"Sound the call for freedom boys, and sound it far and wide,
March along to victory for God is on our side,
While the voice of nature thunders o’er the rising tide,
“God gave the land to the people!”

Hark the sound is spreading from the East and from the West,
Why should we work hard and let the landlords take the best?
Make them pay their taxes on the land just like the rest,
The land was meant for the people.

Clear the way for liberty, the land must all be free,
Liberals will not falter from the fight, tho’ stern it be,
‘Til the flag we love so well will fly from sea to sea
O’er the land that is free for the people.

The army now is marching on, the battle to begin,
The standard now is raised on high to face the battle din,
We’ll never cease from fighting ‘til victory we win,
And the land is free for the people."