Tintern Abbey: A ghost of the shape it once had 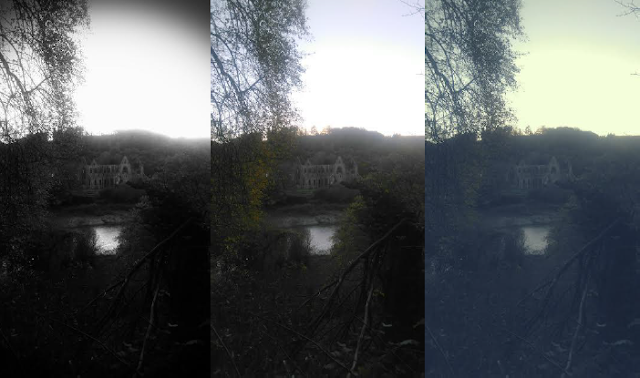 'A ghost of the shape it once had', a misquote from Ronald Johnson's long-form poem, The Book of the Green Man; reflections on travels around Britain in 1962, passing by Tintern on the way: ‘We have forgotten, now, the original inspiration of Tintern Abbey.’


‘We began today
to trace the course
of the Wye

into “Wild
Wales,” Chepstow to Plynimmon’

‘… up Wyndcliffe, wooded with huge oaks’

each bud & thorn
pendant with
water,

not one tufted column, no wall
a mass of moving foliage. Only – the Window.

Its seven delicate shafts
the frame for a more ephemeral world
than glass:

Then, leaving the river, over the hill, to St. Briavels.’ 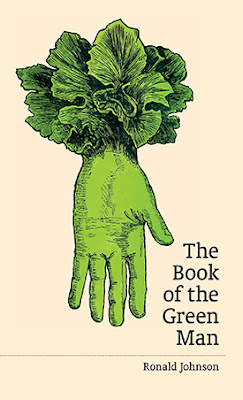 The Book of the Green Man available from Uniform Books.

In search of monastic granges 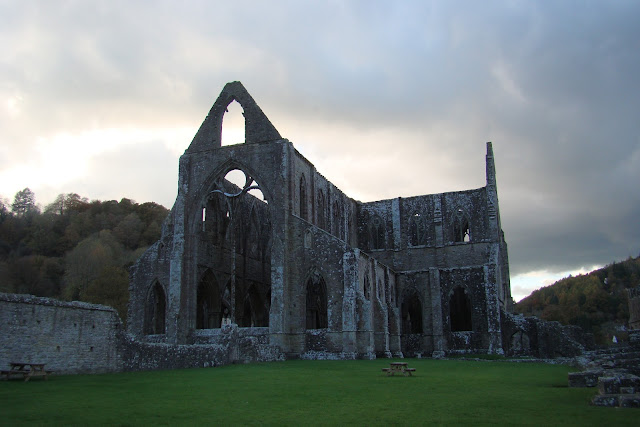 The sandstone of Tintern's abbey church: 'purple through mauve and buff to grey’ under a glowering November sky.

Over the last couple of days I have been out and about in the exceptional Autumnal light, ranging across the Anglo-Welsh borderland of Monmouthshire, the lower Wye Valley and the Forest of Dean. A coming together place: Arthur Machen's 'wonderful and enchanting country' converging with 'the very rim of England, the wooded border country along the valley of the Wye' hailed in Roger Deakin's Wildwood.

Tintern Abbey, the second of my PhD case studies, managed a dozen or so monastic granges in the area, its agricultural hinterland. A grange (from the Latin granum meaning 'grain') was a medieval farm or small estate directly run by a Cistercian abbey with a workforce of lay brothers, or conversi. Such enterprises were the model farms of the age, drivers of innovation in sheep farming, arable production, long-distance trade. With the success of the grange system the 'white monks' of Cistercian houses were inexorably moving away from their high-minded and austere religious beginnings 'far from the concourse of men'. 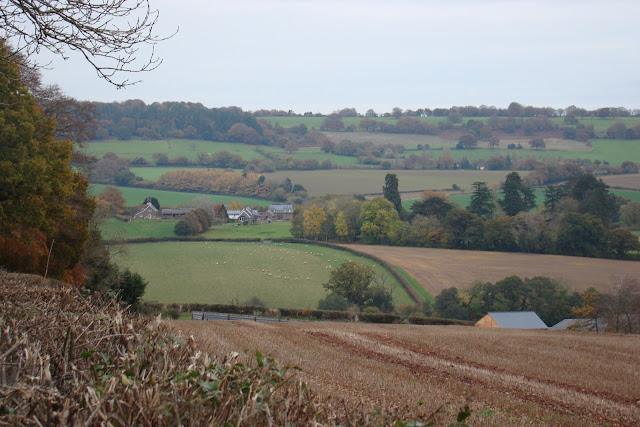 Trellech Grange in its rolling landscape setting above the Wye Valley.

The object now is to get to know the lay of the land of these granges, to determine which to subject to a more fine-grained analysis of their landscape history over the next few months. 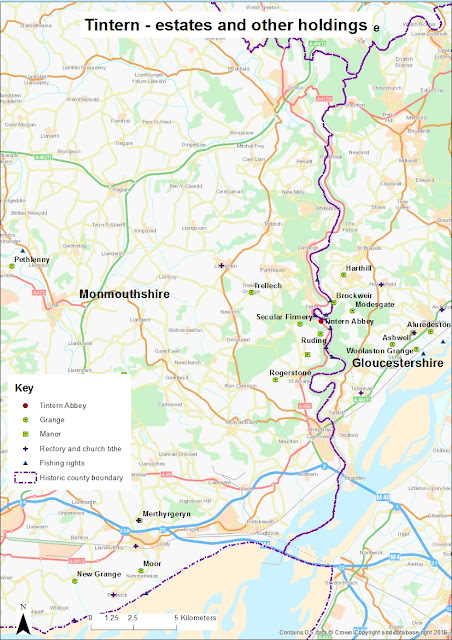 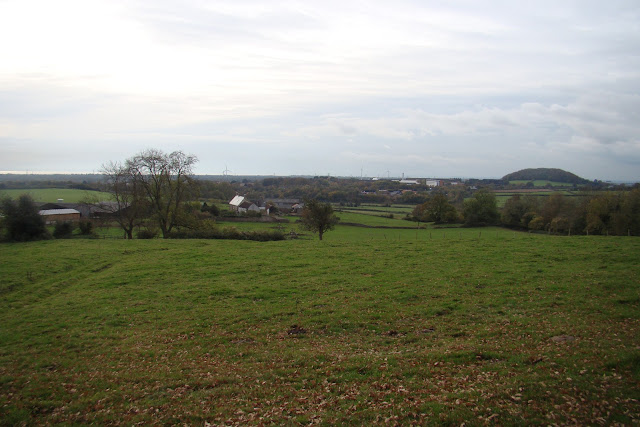 Looking down on Upper Grange (formerly Tintern's grange of Merthyrgeryn) from its higher fields, the pastoral scene in the foreground framed by a horizon incorporating Magor motorway service station, wind-turbines and the chimneys of Magor brewery. 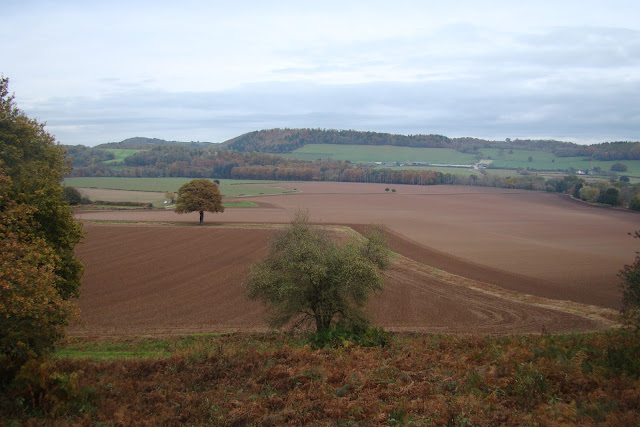 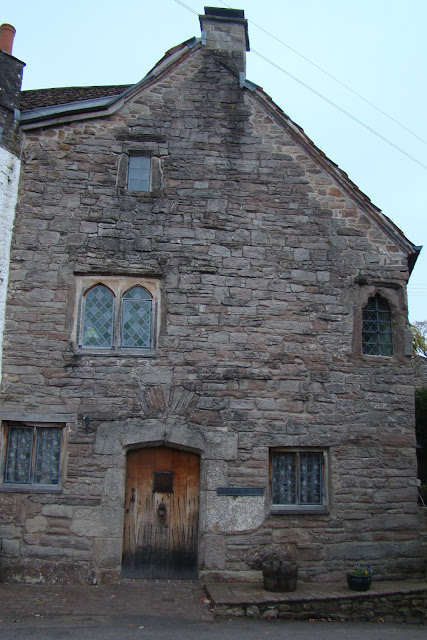 The 'monks house' in Brockweir, part of Tintern's grange in the Gloucestershire hamlet across the River Wye from the abbey. 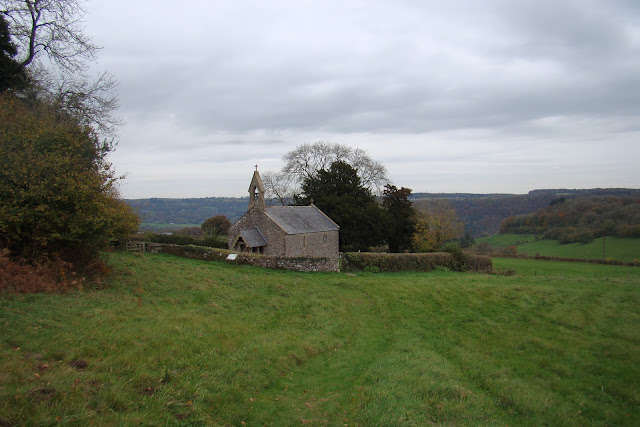 Penterry church, standing within the lands of the grange of Secular Firmary; its name an echo of an infirmary run by the abbey for the local population. 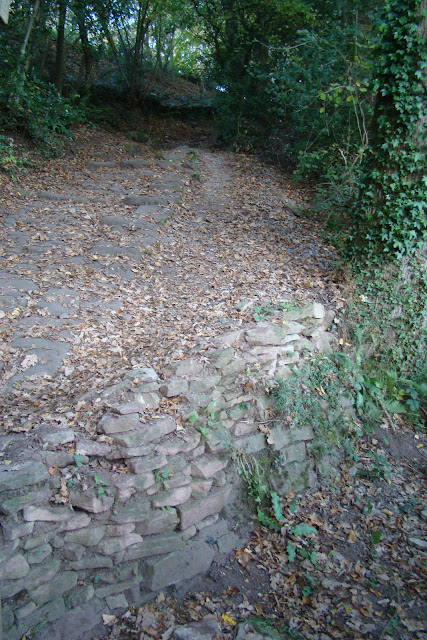 Cobbled track leading from the Wye ferry slipway opposite the abbey to its Gloucestershire granges. 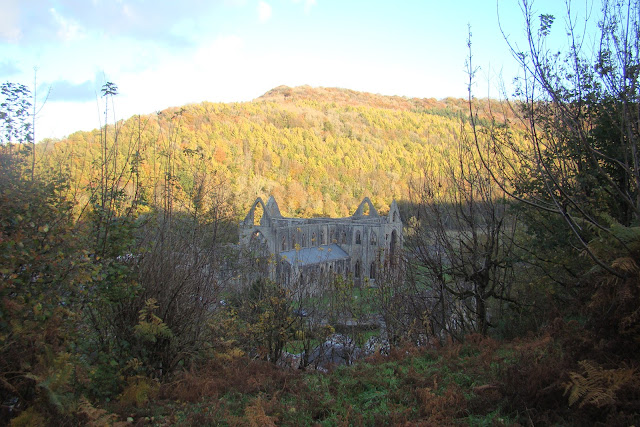 Tintern Abbey enfolded by the wooded slopes of the Wye Valley.
Posted by Eddie Procter (Landscapism) No comments: