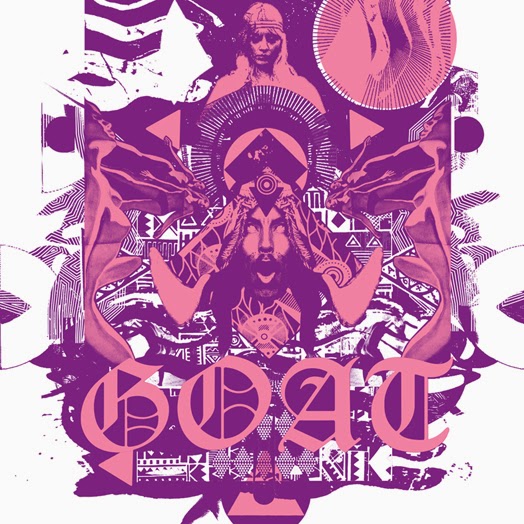 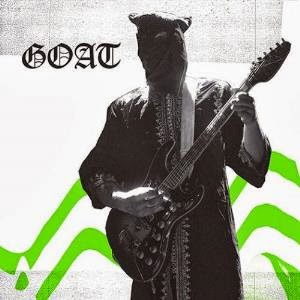 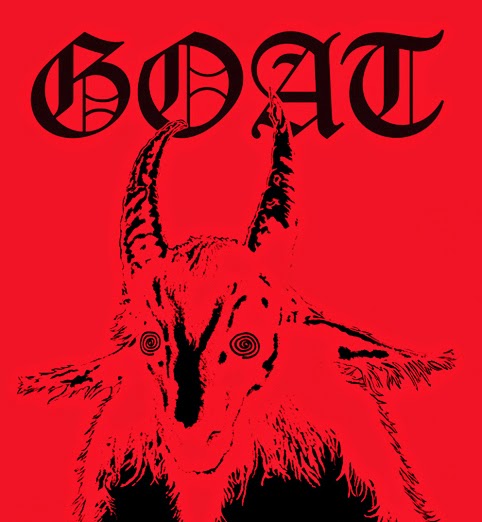 A little off the Landscapism beaten path this one. I spent the early hours of Sunday morning with 1,500 like-minded souls crammed into an old warehouse in Liverpool’s Baltic Triangle, adjacent to the dock where 18th century whaling ships landed their cargoes, watching a pulverising performance by a modern day Scandinavian force of nature, the Swedish psych-collective, Goat.
Seemingly arriving out of nowhere in 2012, Goat claim to originate from a commune in a small village in remote northern Sweden with a history of voodoo and arcane pagan practice; the core members having made music together since they were children and for the last 30-40 years. On stage and in interviews the members wear masks and elaborate costumes, similar in style to the Afrofuturistic Sun Ra Arkestra, and keep their identities hidden. Now this back-story and image is clearly somewhat tongue-in-cheek, and there is a fine line between genuine and original musical and cultural fusion and cliché and novelty value. However, that Goat have so far managed to walk on the right side of this line is down to the quality of their records and mesmeric live performances: a mixture of wah-wah driven psych rock (a genre that Swedes seem to excel at), kraut-rock drone, North African inspired desert blues and hypnotic Afrobeat rhythms.

There were a number of excellent Swedish bands playing at the Liverpool Festival of Psychedelia, clearly a psychedelic genius loci is abroad along the Baltic; the enigmatic Goat will, however, remain strongest in the memory, a counterpoint to the rather bland and formulaic image that most artists and bands of note currently portray.

As the somewhat dismal forces of nationalism, Utopian pipe dreamers and neo-con capitalism collide in Thursday's Scottish Referendum I may not have a vote, but I can daydream about a more rational world in which ...

The Scottish National Party push for a referendum on Scottish independence. The response from the rest of civic and political society across the United Kingdom of Great Britain and Northern Ireland is OK, but thats a pretty narrow question on which to frame such an important process as a referendum. Anger, disenchantment and apathy towards our current political system seem to run deep across all sections of society and territory across these islands. There are also many Scots in England, English in Scotland, Welsh in England, those of Scottish decent across the other parts of the country etc etc; how would you decide who has a say in this matter?

Debate and discussion takes place. The consensus view is that, yes there is a need for a referendum but it needs to be inclusive and give all the people real options to choose from, not just a false binary choice for 10% of the population. This means that the referendum will give a voice to all registered voters across the whole United Kingdom. So the question is framed, and here it is:

Which of the following most closely matches your preference and aspiration for the future political structure of the United Kingdom (England, Northern Ireland, Scotland and Wales)?

2. I would like to see a federal system with meaningful and increased devolved government in Northern Ireland, Scotland, Wales and the regions and cities of England, within a unified United Kingdom.

3. I would like to see England, Northern Ireland, Scotland and Wales become separate independent states.

To ensure that there is no democratic deficit and enable self-determination, if a majority in any of the four constituent parts of the United Kingdom vote for option 3, separation, then that country would have the right to secede from the UK and become independent.

Am I naive in thinking that a majority vote for option 2, a federal Britain, would kick-start the urgently needed progressive reform of our democratic structures?

Well I can dream. Although, maybe the seismic shift towards political engagement in Scotland may just tip us into believing that change can come for everyone. What a shame it would be if we are diverted from such an opportunity by a messy, prolonged, costly and divisive decoupling of Scotland from the rest of us?