Ben Myers - The Gallows Pole: Once upon a time in the West Riding 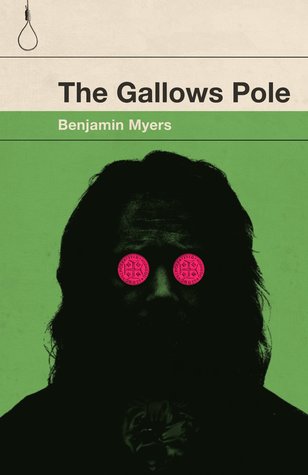 The arresting cover of Ben Myers' sixth novel is a statement of intent for the work inside: historical fiction with danger and harshness and radicalism foregrounded; a bit punk rock, a bit psychedelic, not too knowingly retro. Frankly, I'd have bought it for the cover artwork alone. Thankfully, this is an author with form and the story itself does not disappoint; it cracks along at pace, based on a little-known episode in history tailor-made for the strain of gritty rural-noir which Myers, Paul Kingsnorth, Cynan Jones, Ross Raisin and others have rendered in recent years. The unearthed source material merits such a telling. It's the 1760s and the wild West Riding of Yorkshire is on the cusp of transformation, careless of the coming pandemonium to be wrought by industrialised manufacturing. Amidst the self-reliant weaving communities of the Calder Valley - for William Atkins (The Moor) 'a ditch made dim by its narrowness', a place of fugitives - emerge the Cragg Vale Coiners. Led by the brutally charismatic 'King' David Hartley, their outlaw business is the clipping of coins to produce counterfeit money; local currency for local people, recycled coin outwith the control of not only the crown, government and taxation but also the new capitalists ready to harness and exploit the power of land and labour. Thus, a dangerous business and (literally) a capital offence.

The book's stylistic and narrative similarities with Kingsnorth's The Wake are striking. Both have central characters - David Hartley and Buccmaster - who are deluded, self-mythologising and ruthless yet also cast with a certain 'Man With no Name' dark allure. Like mythical cowboys of the northern past, these doomed men raging against the dying of the light are also possessed of pagan visions of stagmen and the old gods. Both authors utilise blunt vernacular speech to give voice to their protagonists, albeit in Kingsnorth's case a 'shadow tongue' version of Old English is utilised for the whole narration.

Hartley's lair is high amongst 'the hill's hanging silence', to use Ted Hughes' description of this haunted terrain of his youth, where bosky slope gives way to moorland waste. A hint of Cormac McCarthy pervades the depicted harsh beauty of this landscape. When Hartley's nemesis, excise-man William Deighton - a walker of the moors and valleys in pursuit of those who would evade the (real) king's tax - returns to Halifax in the gloaming, the town's lights flicker 'as if the sky had fallen in defeat, and draped itself across the rise and fall of the bloodless, smothering land.' To my mind what elevates Myers prose above much similar place-bound company is the clear rootedness of the writing in the Calderdale-based author's embodied knowledge - based on walking and observing - of the landscape in which the actors operate, buttressed by an authentic portrayal of the life-rhythms of those working the land. This is an author unafraid to leaven the drama of the story with the small detail of rural life: for instance, a couple of pages describing a scything team working their field at pace 'as they raced against the season and the coming of the harvest moon.'

A certain poetic mysticism is also scattered amidst the thrifty speech of Hartley and the Coiners, somewhat at odds with their rough ways: 'rope or rain or a day threshing grain ... I take each as it comes'; 'the moor is the moor and the wind always blows.' Thugs ain't what they used to be, perhaps. Silver-tongued maybe, but there are frequent brutish scenes of rising and implied violence, recalling prime-Scorsese or, closer to home, Shane Meadow's Derbyshire-set Dead Man's Shoes in their cinematic menace and liberal deployment of the harshest word in the English language, not quaint. The shocking end of loud-mouth drunk Abraham Ingham thrust head-first into an open fire, 'left smoldering, a spent match in human form' as his killers return to their tap-room pints, is particularly wince-inducing. As is the defilement of the traitor James Broadbent in York gaol. A gruesome end seems to be a possibility for just about everyone involved.

This violence, combined with the radical social commentary of the story and pervasive sense of movement through the landscape, bestow filmic qualities which the author acknowledges as he describes an eclectic playlist put together whilst writing the book. It's not hard to hear this music soundtracking a film adaptation of the book, which might look a little like a mash-up between Ben Wheatley's A Field in England, Ken Loach's Black Jack and Stanley Kubrick's Barry Lydon.

As the place-names in the narrative came thick and fast - reminiscent of a seventeenth-century survey of manorial bounds - I pulled out my battered Ordnance Survey map of the South Pennines, weathered by time, held together by yellowing sellotape. Family connections bond me to the country immediately north of Calderdale, Keighley and the Worth Valley over Cock Hill and Nab Hill, and I have previously posted about this landscape, my younger self's introduction to hill walking, now embedded in memory. The names on the map speak of place as, above all, morphology and topography. Northern - mostly Anglo-Saxon or Norse - descriptors of the lie of the land. Clough, slack, holme, delf, edge, nook, wham, carr, hey, hole, head, nab, bank, dyke, shaw, royd, shelf, stones. A lexicon used by Myers to rivet the narrative to its locale; to particularise the valleys and streams and rocky places and moors and woods in which the story unfolds. Many of these toponyms have been appropriated as local surnames, fixing a symbiosis between people and place; the bearers literally a product of their landscape. And there, above the river Ryburn feeding into the main Calder Valley, a crow's fly over Crow Hill from the Hartley homestead in Cragg Vale, spreads Gallows Pole Hill. Presumably, part-inspiration for the book's title (alongside the traditional song, The Maid Freed From the Gallis Pole)? 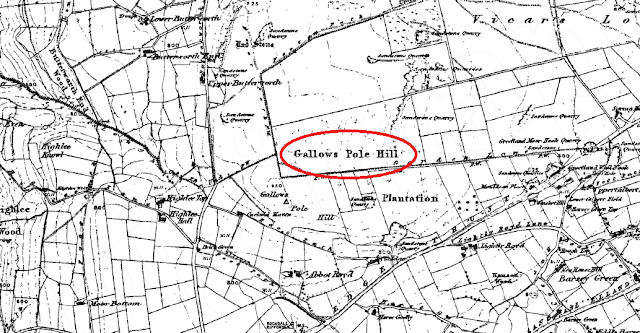 One minor place-naming misstep is the use of Calderdale and West Yorkshire, modern-day administrative units which would not be used as descriptors of the local area by eighteenth-century folk. Not sure either about the use of the archaic 'Yorvikshire' in Hartley's vernacular, but artistic license at play here so fair enough. Of course, it is the storyteller's prerogative to extrapolate the partial facts that are fed down through history but this reader also wonders whether King David really was as locally revered and acclaimed as suggested. How many really were thankful to Hartley for clothing and feeding them, and giving them hope? Did thousands really line the old streets of York to view his procession to the gallows?

Not in dispute are the economic changes which circle around and loom over the actions of the Coiners (the 'progress' of proto-capitalism, industrial development, a hardening of the rule of law and land ownership), prefiguring the enormous rupture in the way of life of the independent dwellers of these previously left-alone valleys that the Industrial Revolution would bring. Earlier in the eighteenth-century Daniel Defoe had commented approvingly on the lack of dependence on and subservience to the gentry amongst the self-sufficient and egalitarian populations of the farmsteads and hamlets of these hilly districts of the West Riding. As the century draws to a close the characters here are lamenting not only that 'the machines and mills are coming' but also 'they do not give a fuck about us hill-dwellers'; 'the land is being sold off. They say there are mills the size of cathedrals in Lancashire.' The self-made prosperity of the cottage industry of small-holdings and hand-looms is coming to an end. A few decades later Halifax and the Calder Valley would be central to a more famous popular uprising, the revolt of the Luddites; a conflict which Robert Reid in Land of Lost Content described as threatening 'the stability of the nation from within as it had never been threatened since.'

In the end, and in the face of this maelstrom, we leave Hartley dreaming of his moor and woods, and the Stagman: 'still he waches now and so too will be there when im drug up to that gallis pole that awaytes us Heel be thur I no it Waytin a me.' In reality, as the epilogue hammers home, 'the stone cathedrals of mass production' were to win out and King David would be forgotten. Mills and new rows of terraced houses, and turnpike roads, canals and railways, would remorselessly fill the valleys, transforming not only the population's economic and social lives but also the very landscape. The Coiners and their descendents would ultimately bend to the will of the new puritans of capital, commerce and mass-production.