The Combe was ever dark, ancient and dark 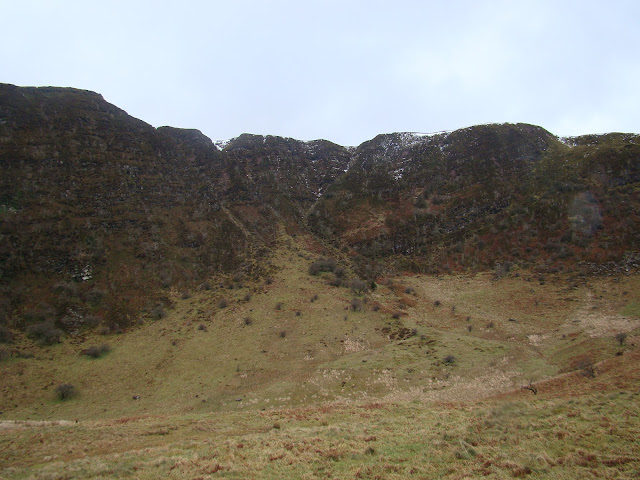 Its mouth is stopped with bramble, thorn, and briar

Cwm, corrie, cirque. Geography lesson rote learning that has stuck. The same etymology from different terrains - Wales, Scotland and France; combe is a south-west England variant - defines the amphitheatre-like landform that can be found at the head of a valley. Classically, U-shaped with a steepling mountain forming the headwall and arduous scree slopes topped by climbing ridges aside. But also equally arresting in more modest surroundings: the spring-line bowl of a chalk down, Iron Age hill-fort ramparts casting slanting shadows from above; or constructed in miniature in a dozen stream-fluted tributary gullies and hanging valleys indenting an upland river dale. These are the nooks, slacks, hollows and cloughs that form a sort of "invisible estate", to use Henry Vaughan's phrase, in hill and mountain country.

Such places are often looked down upon, both literally, from a higher ridge or summit, and metaphorically because they are liminal backdrops to the landscape, away from the toiling tracks to the heights. Not most peoples idea of a destination, part of the scenic wash that accompanies an ascent to bag a peak or complete a horse-shoe circuit: integral but largely uncharted topography. And yet, as Nan Shepherd so compellingly shows in The Living Mountain, her antidote to shallow thrill-seeking, there is "wild enchantment" to be had in following a mountain stream to its airy source, in picking a route across a stony slope; in gladly going nowhere in such catchments. In Shepherd's words: "often the mountain gives itself most completely when I have no destination, when I reach nowhere in particular, but have gone our merely to be with the mountain as one visits a friend with no intention but to be with him". 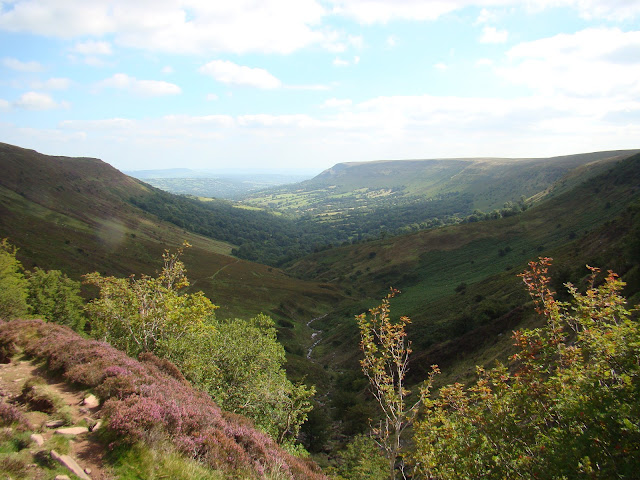 And no one scrambles over the sliding chalk

The unfinished business of the Right to Roam Act, 2004 - an addendum to the progressive public access legislation that saw the introduction of National Parks in England and Wales in 1949 - has provided the opportunity to freely wander across vast tracts of previously off-limits open, uncultivated mountain, moor, heath, and downland. Ordnance Survey maps clearly demarcate land where this freedom can be exercised, and many lonely valley heads are now legally open to anyone to explore. And yet, and quite rationally, most people stick to the known paths when in this opened up country. Veer off to find your own personal wildness and you will soon be quite alone. 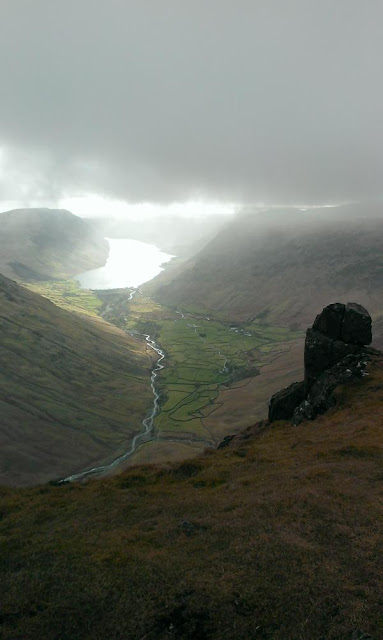 Down the half precipices of its sides, with roots and rabbit holes for steps

The attraction here is the feeling not just of in-the-moment aloneness but of new frontiers. In The Wild Places Robert Macfarlane rightly, and cheerfully, points out that "the human and the wild cannot be partitioned"; that even seemingly remote places have been dwelt in, worked in and visited at some point. But walking or scrambling a steep slope at a valley fountainhead, well away from any path or right of way, and you may be the first human breath, touch, sight within that micro trajectory for what: a year? a decade? a century? The particular ground you are covering may have seen few, if any, people traverse the exactitude of its quiet terrain over several millennia. In a sense you may very well have entered a version of the "chaste land" that many would agree with Macfarlane is a mythical concept.

I have pondered finding wildness in out-of-the-way nooks at length in a previous post and won't dwell on this further. It is though interesting to reflect upon who might have been here before you? A fellow Gore-Tex clad roamer, a field archaeologist or botanist, a gaggle of bereft Duke of Edinburgh teenagers, an OS surveyor, a shepherd, a downed German pilot, a sorrowful Romantic poet, another shepherd - maybe benighted, a poacher, a gamekeeper, a deserting soldier, a determined tinker, a pair of clandestine lovers, a party beating the bounds, gambolling children from a summer sheiling, an army scout, a searcher of new territory, a hunter, a gatherer. Some of these perhaps, but probably no-one has ever stroked that rock, slaked from that point in the stream, gripped that tree root, slipped on that patch of scree. You are a momentary pioneer. 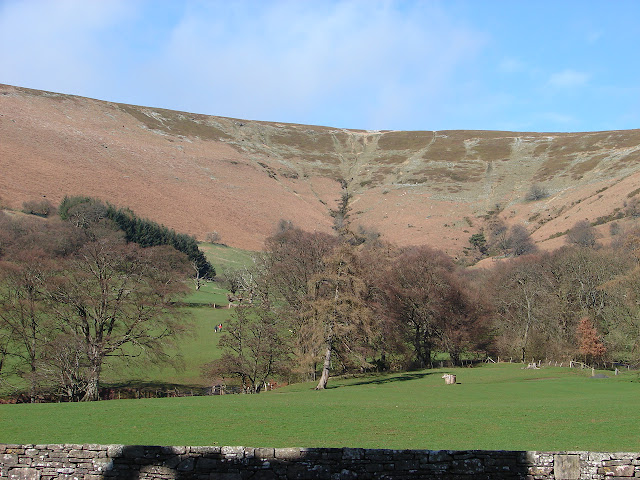 The Sun of Winter, the Moon of Summer and all the singing birds
Except the missel-thrush that loves juniper,
Are quite shut out

Writing now my mind is drawn to an array of valley heads, fell sides and steep gullies: some monumental, others with a gentler force of wildness. Ponden Kirk, the rain-lashed millstone grit venue for my first childhood hillside adventuring, the springs and hanging woods of the western Cotswold scarp combes, and the ice-scraped bowls of the upper valleys of western Lakeland: Ennerdale, Eskdale, Mosedale. Student hangovers blown away dropping off the monk trods of the North York Moors into the beginnings of Great and Little Fry-up Dales (in search of breakfast?). Regular haunts amongst the darren, pant and ffridd of the less-frequented valleys of the Black Mountains: Cwm lau, Olchon, Nant Bwlch and Grwyne Fechan; places unburdened by topographical complexity or any hint of being a final destination. Further afield and a memorable day scrambling around a corrie in the bowels of the southern-most Andes of Tierra del Fuego, falling asleep with tired feet in the cool mountain water freed from the glacier above. And I can picture many more, often with a clarity that escapes memories of the summits and ridges with which they share topological space. 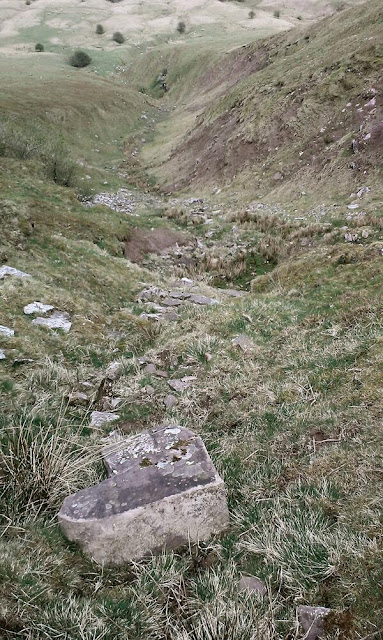 As often with landscape, it is the poet who best captures the words for this terrain. In The Cataract of Lodore Robert Southey vigorously brings to life the darting, roaring, guggling, brawling, sheeting passage of mountain becks and burns as they proceed downward from their springs, tarns and bogs "under the mountain's head of rush and stone" as Edward Thomas would have it. These watery starting lines disguised as cul-de-sacs are a gift to the rural flâneur; sheep tracks, streams, crags, ruined sheep folds - all encourage the curious visitor to roam hither and thither rather than plod a linear course. To seek a path in this domain of the mountain hare, red kite and curlew, petrified hawthorn and blackthorn, lichen-taken crag and scree: "scanning the close at hand for interest, or at least a place to crouch in out of the wind while the others scramble up" (Hilles Edge, Glyn Maxwell). 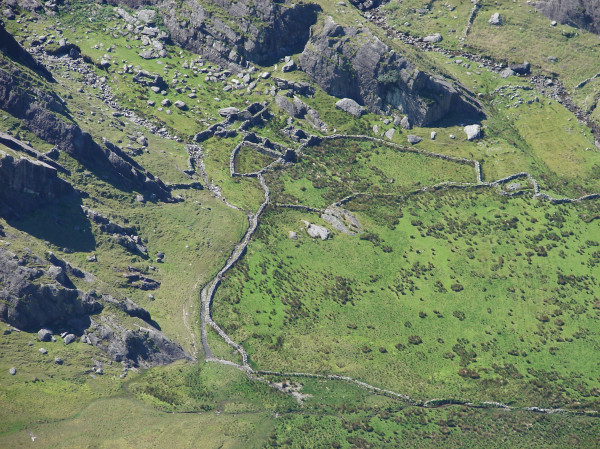 The title and extracts here are from Edward Thomas poetic paean to these unsought commons, The Combe, published in 1917:

The Combe was ever dark, ancient and dark.
Its mouth is stopped with bramble, thorn, and briar;
And no one scrambles over the sliding chalk
By beech and yew and perishing juniper
Down the half precipices of its sides, with roots
and rabbit holes for steps. The Sun of Winter,
the Moon of Summer and all the singing birds
Except the missel-thrush that loves juniper,
Are quite shut out. But far more ancient and dark
The Combe looks since they killed the badger there,
Dug him out and gave him to the hounds,
That most ancient Briton of English beasts. 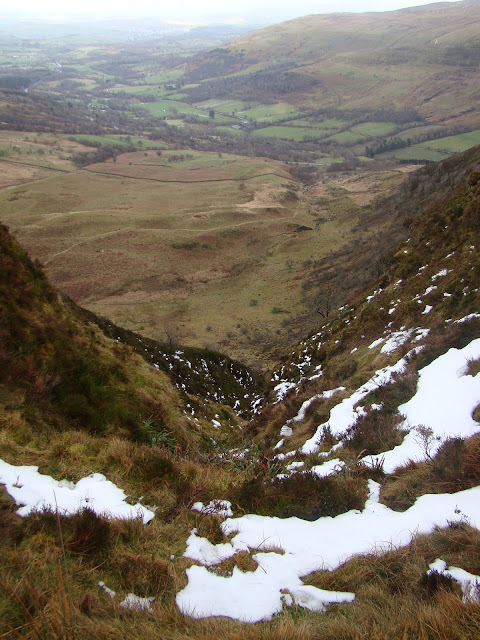 Thomas, Edward (2004) 'The Combe' and 'Over the Hills' in Edward Thomas: Collected Poems (Faber and Faber).