Anyone with an interest in landscape archaeology and landscape history will know well the earthworks, mounds, ditches and ancient trackways that abound across the British Isles: the barrows, hillforts and ‘Celtic’ field systems of prehistory; the motte and bailey fortifications, ridge and furrow patterns, deserted village ‘lumps and bumps’ and holloways of the medieval period. 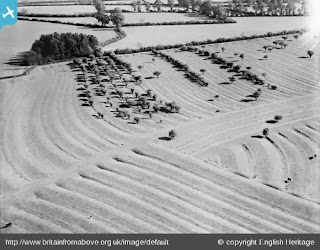 Sometimes hard to trace on the ground or on maps such features are brought strikingly to life through aerial photographs and, perhaps most clearly, topographical survey plans. There is something deeply aesthetically pleasing about the way the hachured symbols of the plan bring clarity, order and beauty to even the most functionally mundane relic of past human endeavour.

Once you know what to look for, identifying these features enhances time spent out in the landscape. A walk in even the seemingly most unspectacular country can yield a dried up fishpond hidden in the brambles, pillow mounds in which rabbits were once bred as much needed peasant meat or the trace of a World War II gun emplacement. 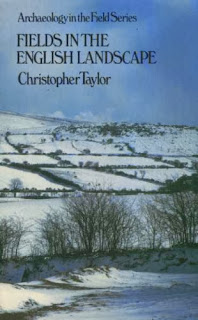 The earthwork relic that has come to fascinate me the most is the medieval strip lynchet (from the Old English hlinc - 'ridges, terraces of sloping ground'). Lynchets manifest themselves as a series or flight of stepped terraces, normally visible on now turfed hill-sides. Most prevalent in the steep-sided valleys of the South West, the Cotswolds and North Yorkshire (where they are known as 'raines') but also found in hill country across many parts of Britain, they represent the fossilised remains of ploughing; essentially the hill slope equivalent (and sometimes an extension) of the more widely known ridge and furrow patterns on level ground. Not necessarily consciously created as a feature in themselves, though some initial construction may have been required on the steepest ground, the lynchets are the result of the repeated action of the plough's mould-board turning the loosened soil outwards and downwards; over time forming a level strip or tread for cultivation with a scarp slope (a 'riser') down to the next strip below. Generally, and reflecting the practical nature of their creation, they follow the contour lines of the natural slope and are usually between 60 and 250 yards in length.

Originally thought to be evidence of Roman or medieval vineyards (in the Pennines?), more detailed study has now clearly shown that, in most cases, they represent the communal efforts of medieval peasant farmers to bring marginal hilly ground into cultivation where the supply of good quality lower level arable land was in short supply; in the words of Richard Muir, '... it seems likely that many systems of strip lynchets exist as memorials to communities afflicted by overpopulation and landhunger'. During the early fourteenth century, and up to the onset of the Black Death in 1348, the population had seen sustained increases that were putting huge pressures on the agricultural resources then available. It is during this period that, through sheer desperation and much arduous effort, the ploughing of this tough ground would have mostly taken place. Once formed, the terraced tread would provide new fertile land on which to grow corn and other crops, as well as richer grazing for animals. Probably the most well-known example of medieval lynchets are the terraces that adorn the steep slopes of Glastonbury Tor, although no doubt there are other less utilitarian theories as to their origin in this sacred place. Of course, this is not purely a medieval or British landscape feature, as the terraced hill-sides of the uplands of South America and Asia testify.

As pressure on the land reduced due to a falling population post the Black Death, and contemporaneous with the desertion of whole settlements and other areas of cultivation, many lynchets would have returned to marginal pasture or scrub land. However, and as ever, this was not a planned and uniform development. In some areas cultivation may have continued until the processes of enclosure began to take root in the later medieval period, with such land then turned over to sheep. In other cases the formations that we see today were fossilised in the deer parks and Arcadian designed landscapes of country houses; yet another form of dispossession of the many by the few. There are a few places, like Coombe Bisset in Wiltshire, where terraced lynchets have remained in cultivation up to the present day, though this is normally on gentler slopes.

As with other topographical features there is scope for misinterpretation when examining lynchets. Natural features formed by processes of erosion, soil creep and river action can be mistaken for man-made terraces, particularly at a distance. Some lynchets can also be found that are likely to be prehistoric in origin. The best examples are in the chalk downland of Wessex and south-east England, rectangular in character and much wider (often in excess of 100 feet) than their medieval counterparts. Although less is known of the origins and use of these systems, it would seem likely that they were abandoned when settlements began to move down to the more fertile soils of the valleys and remain as traces of early organised agriculture on the dry, thin-soiled turf of the downs.


For me the poignancy of strip lynchets is that, unlike the topographical reminder of elites and power embodied by say a Neolithic barrow or an Iron Age hillfort, they are examples of hard-won everyday landscape features created by working people: the very people whose toil set the template for the countryside we see today in many parts of the British Isles. They also remind us, however, of the changing character of the landscape; the seemingly timeless pastoral, sheep-cropped scene beloved of photographers of the Yorkshire Dales or the Cotswolds that was once the stage for a thousand peasant families and communities using their collective labour and ingenuity to avoid famine.

Hoskins, W, 1985. The Making of the English Landscape. Penguin.

Platt, C, 1978. Medieval England: A Social History and Archaeology from the Conquest to 1600AD. Routledge.

Raistrick, A, 1979. The Making of the English Landscape: West Riding of Yorkshire. Hodder and Stoughton.