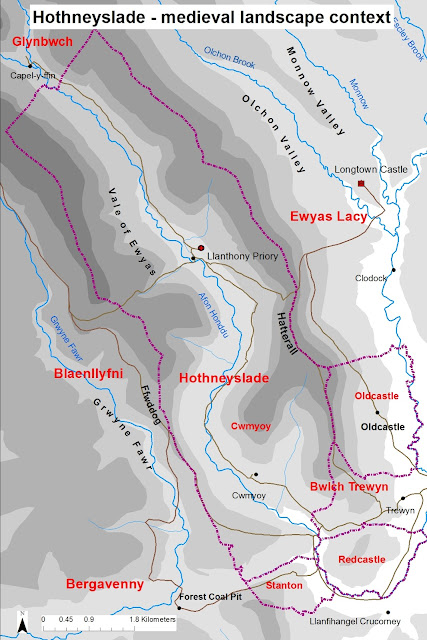 Having spent most of the last month in my study/ spare room garret, I am now emerging for fresh air having completed the drafts of two PhD chapters on the subject of my first case study landscape: the Black Mountains manors of Llanthony Priory, collectively given the archaic medieval name of Hothneyslade or Hondyslade (and multiple variations - probably originating from a corrupted combination of ‘Honddu’ or its pronunciation-based derivative ‘Hotheny’, the name of the river in the Vale of Ewyas, and either lled [Welsh for ‘wide’] or slade [Old English for ‘wide marsh’], perhaps incorporating ‘Ewyas’ or ‘Ewias’, the historic Welsh name of the district).

One output of this work is a series of Geographical Information System (GIS) drawn maps providing a snapshot of the landscape of the area at different points in time. The map above shows the general topographical context of the study area. Below can be seen land-use and landscape maps for c.1300 and c.1700 (speculative, based on variable documentary information, field observation, historical mapping and so on) and the mid-nineteenth century (in greater, individual field, detail, as transposed from contemporary tithe maps).

Without the context of an accompanying textual narrative, maps are arguably just pretty diagrams, but what a picture they provide (and I'm not ready to inflict 25,000 words on the wider world yet). A few themes can be sketched out here though. Although perceived as a wild upland area of the Black Mountains, this was not terrain dominated by dense impenetrable forest in the medieval period, it was long settled and managed; however, outside of relatively small clusters of closes around the farmsteads of the easily won and most fertile ground, this was an open rather than enclosed landscape: great flood meadowlands on the valley floor, common wood pastures with grassy glades and stands of trees climbing the hillsides to the open common summer grazing of the high ridges.

It was the late fifteenth century through to the seventeenth century that saw the landscape transformed; plotted and pieced through what Christopher Taylor dubbed the ‘large-scale but silent enclosure by agreement’ of piecemeal consolidation, enlargement and expansion of farmsteads. A proto-capitalist agrarian culture inexorably sidelining the old ways of transhumance and finely-grained communal rights and responsibilities. And the agents of this change? Not a powerful lordship but an emboldened and emerging class of cash-rich yeoman tenant farmers, cladding their smoke-filled hall-houses and cruck-framed longhouses in white-washed stone and tile, reflecting their new-found wealth, stability and status (of course, this wouldn't last and their favourable copyhold tenure and peppercorn rents would eventually be better 'managed'; aspirational well-to-do families ossifying into the insular hill farming poor within a few generations). By the nineteenth century further inroads had been made into the common waste as a land-hungry population set up smallholdings above the mountain wall, though this country did not succumb to the regimentation of parliamentary enclosure: the valleys were already fully enclosed, whilst the moorland commons remained (and remain) open. Throughout all these periods, what is now largely a monochrome green fieldscape included a more diverse palette of reds and browns, signifying the mud and toil of arable cultivation in a more mixed farming economy. The clay-brown fields of the nineteenth century maps in particular highlight this forgotten feature of our hill country.

Anyway enough words, have a look at the maps. 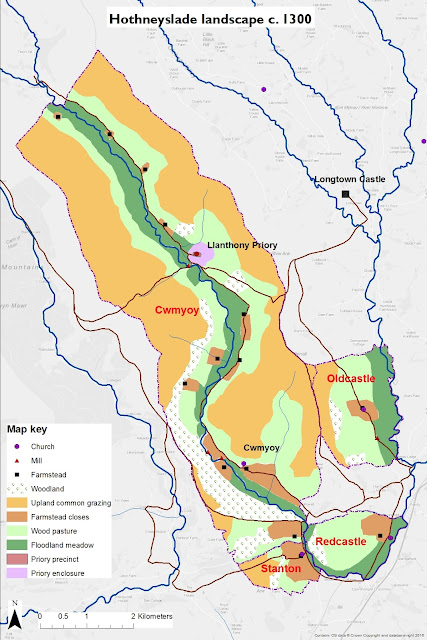 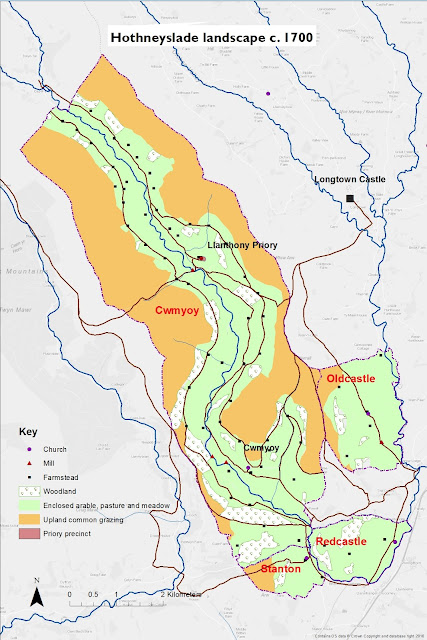 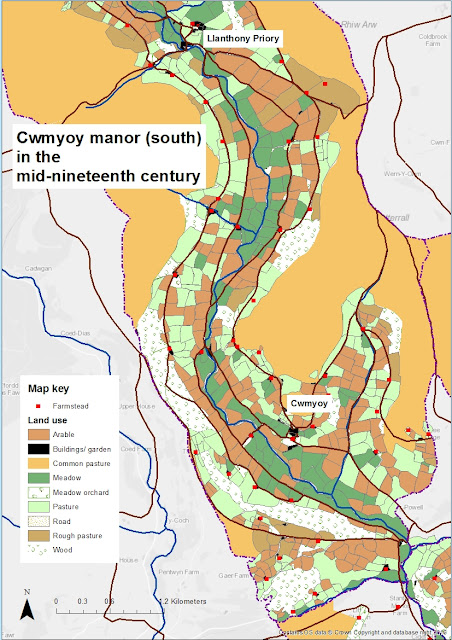 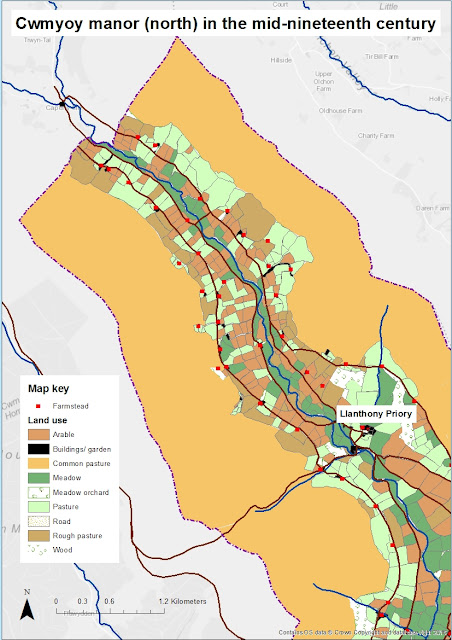 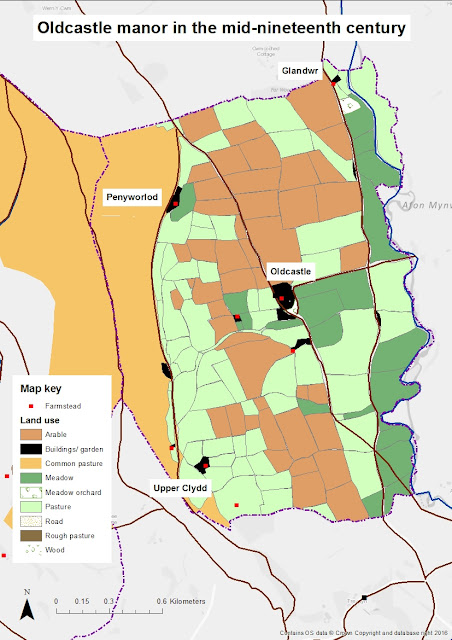 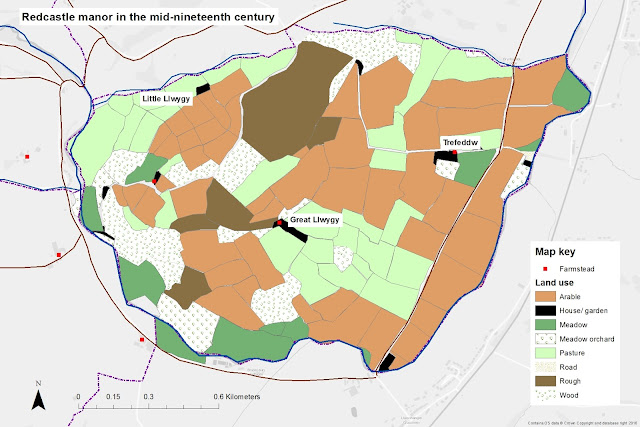 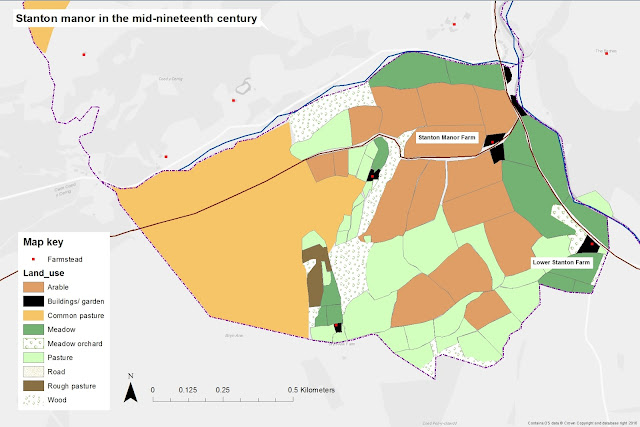