The New English Landscape: A Review 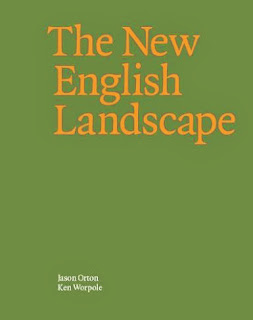 This is a longer version of a review that was written for the Caught By The River web site.

This is a view from the west of a book about the far east of England. Although a relatively short work, The New English Landscape, a combination of Ken Worpole’s words and Jason Orton’s photographs, covers much ground as it sets out “… to meld together historic, aesthetic and ecological elements around the issues of habitat, landscape and sense of place which have been in play in Britain since the Second World War”.

Worpole makes it clear from the start that the “new English landscape” of the title is an “imaginative construct”. This is not an attempt to comprehensively chronicle post-war developments in the English landscape as a whole; the methodology here is a focus on a particular genius loci rather than the more conventional magisterial sweep of, for instance, W.G. Hoskins’ The Making of the English Landscape or, more recently, Trevor Rowley’s The English Landscape in the Twentieth Century. The canvass for this exploration is very specifically the “bastard countryside” of the estuary indented, marsh rich and semi-industrial Essex coastline – a liminal wonderland at once on the doorstep of, but also estranged from, the Great Wen of London. This is the territory explored in The Joy Of Essex, Jonathan Meades idiosyncratic filmic tour of the county.

As a western dwelling, midlands raised and northern souled reader I cannot help noticing that Essex, and the wider East Anglian region are not exactly under-represented in the current well-spring of nature and landscape writing. At times it seems that Norfolk’s Waveney valley and environs – stalked by dragoons of Macfarlane’s, Deakins, Mabey’s and Cocker’s – is the lone player in town; challenged only by the psychogeographically-minded flaneurs, striding in Iain Sinclair’s mighty slip-stream across the edgeland’s of London, with the military-industrial marshes of Essex on their mind. But, in many ways, this is the book’s over-arching thesis: that the centre of gravity of ideas, art and writing on ecology and landscape has moved eastwards to envelop not just a previously neglected region, but changing perceptions of what constitutes places worthy of comment and study.

Though a regular visitor to the comfortable inland farmscape around nearby Saffron Walden, I am less than familiar with the landscape of the Essex coastline. In many ways this makes the subject matter of the book all the more intriguing. The sense of everyday otherworldliness that Worpole’s prose and Orton’s photograph’s convey pulls in the uninitiated. My own landscape sensibilities tend to naturally draw me in to the rugged or more obviously pastoral scenery that the north and west of the British Isles specializes in – perhaps somewhat hackneyed, though much-loved, National Trust calendar fodder; land that fuses Virgil’s Arcadian vision of Golden Age plenty and rough-hewed wildness. But I am also attracted to explore the strange and unexpected that lurks within seemingly humdrum and workaday places – whether rural or urban; always looking to metaphorically or literally nip around the next corner. So, here is an opportunity to trespass eastwards and embark on a tour of The New English Landscape.

The book, partly inspired by inter-disciplinary conferences at Cambridge University spanning ecology, imagination, place and memory, commences with an analysis of shifting perceptions of place and identity in the post-war period, including a run through of the landscape writing and art that has come out of East Anglia and, more particularly, Essex; the work of a truly diverse cast of characters, from Eric Ravilious to W.G. Sebald. Worpole argues that the “over-lush pastoral” vision of the countryside that characterised English landscape sensibilities before the Second World War – partly a reaction to the horrors of the Great War (but also the actualities of increasing urban- and suburbanisation) – has been steadily replaced by an attitudinal shift towards topography characterised by the aesthetics of the “low horizons and cold seas” of the eastern coastline. Whilst a convincing case is made to answer the question of “why does the zeitgeist now favour a lonelier, bleaker, more rebarbative sense of place?” in terms of the work of the artistic and literary communities, I’m not so convinced that this is reflected in the popular imagination; the words and imagery of Sebald and Sinclair have yet to supplant the likes of A.A. Milne, Thomas Hardy and Edward Thomas in influencing how the majority of people engage in England’s dreaming.

The middle sections of the book excavate several layers of evidence to demonstrate how the stratigraphy of the recent history of Essex provides a vision of a vital, lived in landscape; a dynamic entity, based on “felt experience” rather than “pictorial representation” or passive gaze. We are passing through landscape derived etymologically from the landschaft rather than landskip continental root of the English word. Here can be found – cheek by jowl - relics of industrial activity, restricted military areas, sturdily independent marshland communities, communication and energy supply networks and wildlife havens.

In some ways, as with many other non-urban areas, this is a depopulated and empty landscape; one nevertheless that retains loud echoes of past lives and endeavours. An example of this historical ripple, with a strong tradition throughout the county, is the ‘land colony’ movement of the late 19th and early 20th centuries. Worpole essays the development of these pioneering settlements built by zealous and idealistic social reformers, with a particular focus on Mayland on the River Blackwater. Here he now finds “a strange emptiness” amongst the abandoned glasshouses and the line of the former railway track that led to a jetty on the river used to export the communities produce. Although these original “scattered utopias” are now largely gone, their legacy is still palpable and Worpole observes: “When walking the footpaths and seawalls one still comes across smallholders, riverboat dwellers, and others living and working ‘on the margins’; the landscape would be bereft without these small experiments in living”. In this “irregularly infiltrated and islanded shoreline” can also be found lonely churchyards with the graves of Victorian fathers and sons lost at sea, the starting point for local resident Joseph Conrad’s Heart of Darkness and reminders of the chaos and tragedy of the 1953 flood: ‘the Great Tide’ that swallowed up over 300 East Anglian lives.

In the final chapter Worpole muses on the possibilities that the fusing of art, ecology and landscape provide: whether helping to ensure that “unassimilated landscapes”, post-industrial terrains, do not have their histories and memories air-brushed out by improvement and regeneration; or enabling the physical immersion in and manipulation of the landscape by the exponents of ‘Land Art’ – Robert Smithson, Richard Long et al. Having wandered further afield, via Hamilton Finlay’s Little Sparta and Derek Jarman’s shingle beach garden at Dungerness – original takes on a new aesthetic for landscape design, the coda for the narrative returns to Essex: Canvey Wick, ‘England’s little brown rainforest’; Two Tree Island, a former landfill site reimagined as a nature reserve; and Rainham Marshes, a wetland biodiversity hotspot in the shadows of Dagenham’s industrial infrastructure. Previously the eastern repository and depository of all that London needed to function but didn’t want to see or wished to dispose of, this borderland between solid ground and sea has now come full circle: the domain of ecological recovery and aesthetic intrigue, “we all live down-river now”.
The complementary subject matter of Jason Orton’s photographs ranges from classic edgeland shots of scruffy but interesting riverine scenes to images of the groundwork for the London Gateway Container Port at Stanford-le-Hope – new land created by a sea of dislocated brown mud, indented with the maps of caterpillar-tracked endeavour. The most numerous and interesting portray the particular flat and endless emptiness that characterises the islands and peninsulas of the Essex coastline: Mylandsea, Mersea Island, Horsey Island and Canvey Wick; place-names that evoke the misty shadow-lands of Beowulf and Dark Age struggles for supremacy between Anglo-Saxon and Dane. The photographs, mostly taken in winter, convey this landscapes sense that it has, in the words of JA Baker (Essex author of the celebrated The Peregrine, included in the comprehensive and varied list of sources and further reading), “always a sense of loss, a feeling of being forgotten”. They also bring to mind Seamus Murphy’s films made for each of the songs on PJ Harvey’s Let England Shake album, a warts and all snapshot of England in all her ragged glory. A mention also for the inside front and back covers of the book, illustrated with a reproduction of a 1953 Ordnance Survey Map of the County of Essex; an artefact that blends cartographical beauty with layers of functional content complementing the book’s narrative: sea defences, administrative boundaries, locations of ambulance, fire and police stations and so forth.

All in all this is an accomplished, well presented and thought provoking work. I do though have two nagging concerns, not with this book in particular, but with ‘new landscape writing’ in general. Firstly, it strikes me that the slightly musty but important disciplines of landscape history, historical geography and industrial archaeology have, somewhat paradoxically, missed the boat in the resurgence of interest in all things relating to nature, place and memory. I can’t help thinking that it would be a loss if this empirical and methodical tradition of recording and interpreting the landscapes of human endeavour becomes estranged from the axis of contemporary discourse: we need the wearers of old school ‘muddy boots’ as much as edgy urban explorers. Secondly, I would pose the question, is an arcadian or utopian vision of landscape necessarily a bad thing? Should we settle for the prosaic, mundane or degraded – pylons, retail parks and neglected ruins - whether in architecture, the planning process or landscape aesthetics?  I would argue that there is a need to challenge and question the agencies of landscape change manifested in late-stage capitalism rather than passively observing or interpreting their results. Anyway, that is the subject-matter for a much more fundamental and wide-ranging analysis of the new English landscape, a good starting point for which is Doreen Massey's Landscape/space/politics: an essay, a companion piece to Patrick Keiller's Robinson in Ruins film. In the meantime, I would thoroughly recommend this book; a reminder that the margins of Essex are as much a land of dreams as the loftiest of mountains and the purest of streams.

An interview with Ken Worpole about the book can be found on The Clearing web site.