Soft Estate: Edgelands as wilderness, or the new Picturesque 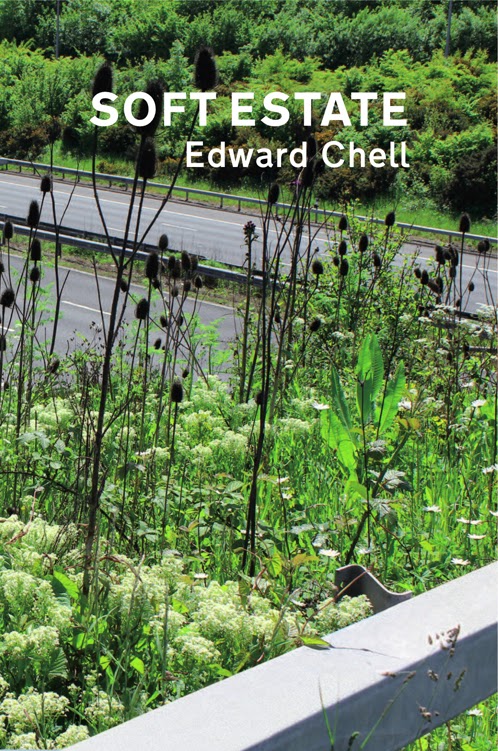 Soft Estate is the title of a fascinating and handsomely produced new book by the artist Edward Chell, with other notable contributions, that adds to the growing corpus of writing, and artistic output, engaging with edgelands and other previously neglected liminal landscapes. The title derives from the Highways Agency description of the natural habitats on the edge of motorways and trunk roads. The book, distributed by Cornerhouse, looks at how these borders offer a refuge for wildlife and a modern form of wilderness. In the author's words:

“While 18th Century tourists travelled to areas such as the Lake District to capture images of wild places, in today’s countryside, uncontrolled wilderness only springs up in the margins of our transport networks and the semi-derelict grid plans of industrialised corridors. These soft estates invite a new kind of tourist, new ways of looking and new forms of visual representation.”

Of course, this is not completely new territory - Richard Mabey and Marion Shoard have long blazed a trail for a greater acknowledgement and understanding of new relationships between post-industrial society and tenacious natural environments - as Bryan Biggs points out in the book's foreword, and expanded on in my review of another recent book, Urban Wildscapes (Eds. Anna Jorgensen and Richard Keenan). Mabey, so adept at perceptive and well-rounded commentary on the ragged edges of the natural world, contributes to the book with his essay, Hidden Dips, which celebrates 'natures irrepressible inventiveness' in the seemingly hostile context of motorway topography; highlighting, for instance, the resemblance of the monumental Spaghetti Junction interchange near Birmingham ('a concrete village green') to 'a gigantic piece of Land Art', and the spread of hardy plant species such as Danish scurvy grass (which he dubs 'wayfrost') throughout the road network, attracted by the saltiness of its tarmacadam host.

The central argument of the book is that there is a 'connective visual experience' between the Picturesque designed landscapes of the eighteenth century and the modern motorway infrastructure, which both acts as a network to visit the fossilised National Trust world of stately homes and deer parks and also mimics the use of reveals, curves, inclines and other architectural conceits to mediate the relationship with, and views of, the surrounding environment. Moreover, the inclusion of ruins and follies as a key component of the Picturesque view is today replicated by the scenes of ruination and dereliction in the edgelands through which trunk roads, bypasses and motorways often pass.

The parallel between the designed landscapes of the Picturesque, commissioned by an elite for their own pleasure and as symbols of status and refinement, and the functional infrastructure of modern communication networks is, perhaps, a little over-stated. However, this is a compelling and well-articulated case. In some respects, it is self-evident that the shadow of Lancelot 'Capability' Brown and the other titan's of the age who re-imagined the vast grounds of the gentry 250 years ago looms large, overtly or subliminally, over the work of modern landscape designers, developers and planners. The use of tree planting, lakes and water features, bridges and carefully planned vegetation to 'soften' transport infrastructure and other new build developments is the result of this legacy, and plain to see. Whether you think this is a necessary process to help create a connection with the wider historic landscape or unimaginative, derivative and mass-produced sops to a backward-looking view of the countryside depends on your perception; and, when it comes to landscape of course, perception is all.

It is certainly interesting to see the well presented images of examples of landscape features from both forms of designed landscapes side by side, challenging my initial view that they were unlikely bed-fellows. For instance, the complex set of water features developed by Brown at Croome Court Park, Worcestershire in 1760, which do bring to mind the latter-day carefully constructed 'naturalness' of lakes and ponds that are so often used to soften (as well as providing flood control for) the commercial functionality of motorways, trunk roads, and their adjacent hinterland of business parks and retail complexes. As the author states, despite their inspiration in the imagery of Classical antiquity,

"The industrial dimensions of some of these artificial retreats (of the eighteenth century), where history, dreams and money collided, have more in common with Meadow Hall or Bluewater than with Epidaurus or Paestum".

It is also the case that these two landscape types have a shared sense of year zero and dislocation from what went before, which separates them from much landscape development, characterised by evolution and adaptation. In the same way that the designers of the Picturesque and their patrons had no qualms about re-engineering natural morphology or demolishing or moving inconveniently situated buildings, so the motorway and its infrastructure often obliterates and destroys the existing terrain through which it passes. Palimpsest is an overused trope when it comes to landscape, but the overlay of what went before with a new canvas is exactly what we can see here.

As this conjoining of apparently binary era's and aesthetics filters into your perception, the other parallels that the book travels through (literally, along the M4 as it traverses 'a golden triangle' of great houses and their parks) come into clearer sight: mock Chinese bridges and concrete flyovers, the carefully managed access routes and viewpoints around country estates and food distribution complexes, and the tedium through time of long-distance travel stop-offs at both coaching inns and motorway service stations. It can, though, often take something of a leap of the imagination to view contemporary utilitarian blandness on a par with architecture that has had the luxury of time to bed into its landscape. Much fits with Paul Farley and Michael Symmons Roberts melancholy description: "Nameless bridge, its cast concrete walls and pillars are dark with run-off stains and vertical deltas of algae ... It is a barely registered, blink-of-an-eye place" (from Edgelands: Journeys into England's true wilderness). However, in some instances, the functional modern out-performs the historic in terms of grandeur. The M40 cutting through the Chilterns at Stockenchurch is described here in poetic terms:

"As the motorway begins to descend to the west, the cutting is heralded and framed by a high-arched single-span bridge. Progressing through what is a sculpted and gradual transition curve, the view beyond towards Oxford is revealed and, despite what is coming already being known, always has an element of visual catharsis".

A personal favourite motorway landscape, connecting the ancient to the modern, is the windswept section of the M62 that traverses the high moorland of the mid-Pennines Lancashire-Yorkshire border at its bleakest; Stott Hall Farm a particular highlight, a Yorkshire yeoman's farmstead standing firm and unwilling to budge as the east and westward carriageways part to go round it. This is a different take on the territory that Iain Sinclair explores in his epic tramp around the M25, as described in London Orbital. To Sinclair the motorway was "...a conceptual ha-ha (marking) the boundary of whatever could be called London". But you sense that the road is there to be used as a devise for meditations on the places and histories through which it passes, rather than explored as part of the landscape itself.

Imagery and illustrations are often regrettably absent or of poor quality in books on landscape themes. This is emphastically not the case with Soft Estate, which is stacked full of high quality photographs of landscaped parkland, wild flowers and motorway topography. The most impressive are the images of the author's own artistic work - paintings, prints, and objects, made using a variety of materials including road dust and etched car parts (see examples above and below). His work takes part inspiration from the vibrant plates displaying exotic flora of the New World found within Victorian natural history compendium's, but also plays with notions of the 'carbon footprint' of the subject matter of the book by literally being composed of the pollutants - oil and dust - that our motorised society exhales. The prominence of wild flowers and plants in this work articulates another theme of the book, the quite staggering (and heartening) volume and diversity of vegetation that inhabits the soft estate, particularly now that the agencies responsible for this terrain seem to have moved to a more enlightened and naturalistic vision of landscape management: the near 10 million trees planted in the 1960's and early 70's alone; the vast colonies of crocus, columbine, Jacob's ladder, wild tulips, daffodils, foxglove, fritillary, primrose and more that have found a safe haven from habitat loss.


Where I would take issue with the books narrative, is the claim (oft repeated elsewhere) that the verges and unmanaged spaces that make up the 'soft estate' provide a last refuge for wildlife; a wilderness in the midst of harsh urbanisation juxtaposed with industrialised agriculture. Of course, intensification of agriculture and increased urban development, and the attendant degradation of natural ecosystems, have been a feature of Britain and the developed world (and increasingly, developing societies) since the agrarian and industrial revolutions that picked up pace in the mid nineteenth century. However, the picture is complex and multi-layered, with ebbs and flows in the health and wealth of the landscape, both spatial and temporal. The idea that a sense of wildness and engagement with the natural world can only now be found in these limited and often relatively uninspiring places (and in some cases, non-places) is, in my view, misguided; an idea that I have expanded upon in my blog post, Finding wildness: places to be left alone with yourself.

The book, in emphasising the beauty and interest that can undoubtably be found in what could be called 'motorscapes' also has one curious omission. There is limited mention, and visual imagery, of the fuel, litter and noise pollution that is a significant element of the motorway and road network, perhaps even its defining feature. I have no doubt that a journey in the eighteenth century would have also included plenty of unpleasant sights (and smells), a fact we are shielded from by the pristine televisual imagery of costume drama's. However, it is certainly hard to separate out the aesthetic pleasures that a motorway journey provides from the pervasive acrid smell of petrol, plastic detritus of overblown consumerism and metronomic roar of engine and rubber on tarmac. Of course it could be argued that such associations already dominate mainstream perceptions (in as much as they exist in the popular consciousness) and there is, therefore, value in counter-balancing this with the positivity and novel viewpoint that the book provides.

Long journeys on motorways have always been an opportunity to glimpse into the half-scenes which you pass, to wonder about what lies beyond. Reading and viewing this book has also made me look at the more immediate surroundings in a new way. So next time you are stuck in a tedious traffic jam on a motorway, you have a choice. To either feel trapped - dislocated and shielded from the outside world - only able to experience the road, in Iain Sinclair's words as a "...dull silvertop that acts as a prophylactic between driver and landscape"; or you can realise that around you is a new world of visual stimuli, designed and sculptured by rational hands, but also strangely wild and unsurveyed.

Alongside the publication of the book, the Bluecoat arts centre in Liverpool has recently held a Soft Estate exhibition featuring the work of Edward and a number of other artists presenting work on a similar theme, which has now moved on to Spacex in Exeter. A description of the exhibition and further musings on the subject matter can be found on Gerry Cordon's always thought-provoking That's how the light gets in blog. An interesting short review of the book can also be found on The New English Landscape blog.

Here is a preview of the Soft Estate exhibition: