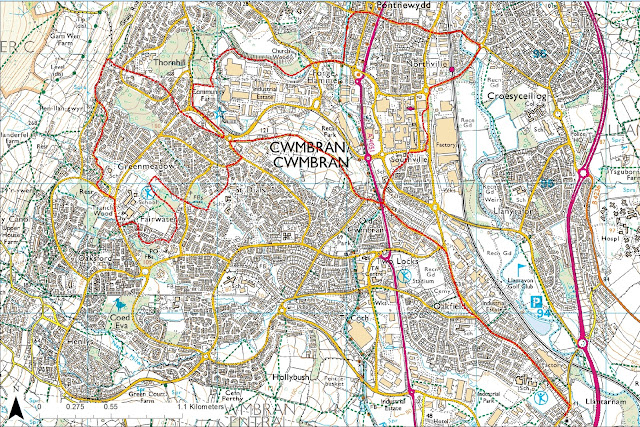 This is a description of one of a series of landscape walks through my PhD case study areas. Here the walk navigates a route around the post-war planned new town of Cwmbran in south-east Wales, developed over the former lands of Magna Porta, the 'home' manor of Llantarnam Abbey during the medieval period.

The walk commences at the church of St. Michael’s in Llantarnam village at the southern limits of the new town, taking in the cul-de-sac lane opposite running parallel with a silted-up ditch draining into a culvert under the main road. This ditch forms part of a system of leats which fed the now demolished corn mill in the village and likely date to the monastic period.

From here a long straight stretch of Llantarnam Road is followed, leading directly from the old lane to the abbey into the centre of Cwmbran. This road follows the line of the route between the abbey and its granges and manorial lands to the north and also forms the start of the pilgrimage way from Llantarnam to the shrine at Penrhys further to the west in the Rhondda valley. Now a main route into the town, this old road is utterly suburban, lined by ribbon development, a mix of some larger Victorian and Edwardian houses, unremarkable housing stock from this period and the mid-twentieth century, and modern day additions. 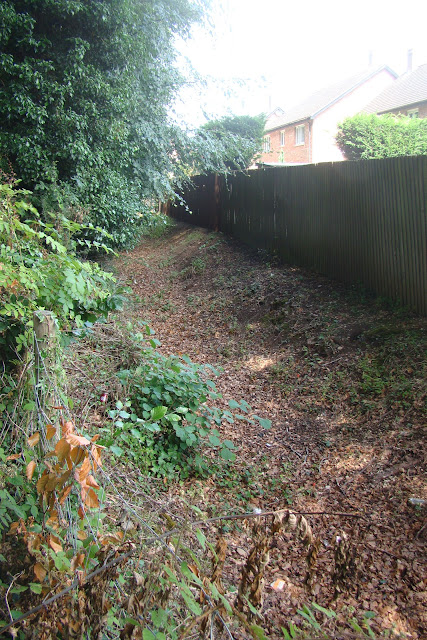 The mill leat opposite the church (Source: author). 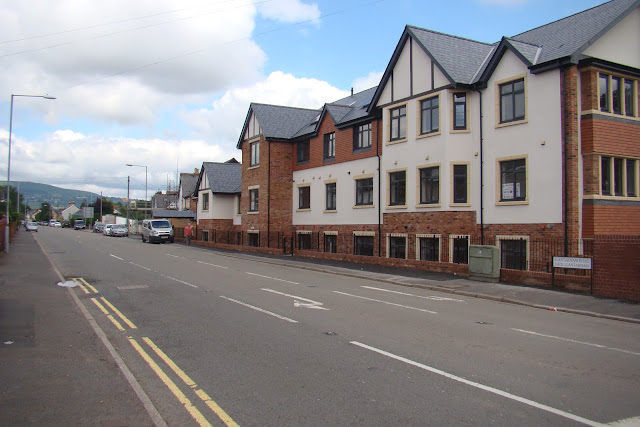 Part-way along the road the memory of the abbey's Scybor Court grange (latterly Court Farm) rises. The school built on the site of the demolished farm during the development of the new town in the 1960s has now itself been replaced by a housing estate, ‘St. Michael’s Gate’ (this name a reference to the local church but perhaps a missed opportunity to remember the medieval grange). Further along the road, the grange is memorialised in the 1950s council housing of the ‘Court Farm Estate’, including Court Farm Close and Court Farm Road (is this association with social housing the rationale for the new estate utilising a different name?). Further progress along the road brings more nomenclature linking the area to the abbey: Llantarnam Dental Practice, Llantarnam Primary School, Court Road Industrial Estate etc.

The land farmed by the medieval grange here is uniformly flat, forming the broad flood-plain of the Afon Lwyd a few hundred metres to the east. The old flood meadows of the grange that have not been concreted over form one of the recreational areas created as part of the planned new town, now the site of a large boating and fishing lake and a golf course. 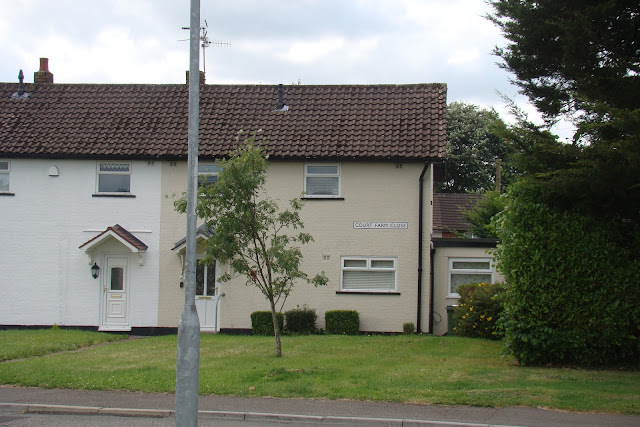 Court Farm Close, part of the 1950s estate built on the agricultural land of the monastic grange of Scybor Court (Source: author).

Passing the green space of Oakfield Park, sited on an area of woodland at a junction of old roads and populated by remnant oak and ash. Further greenery is observed at a roundabout marking the junction of the old road with one of the new access routes through the town. This is the marshy place bordering the lands of Scybor Court grange to the south and the abbey’s Gelli-las grange to the north: the industrial zone along the riverside here interspersed with more open green space and mature trees. 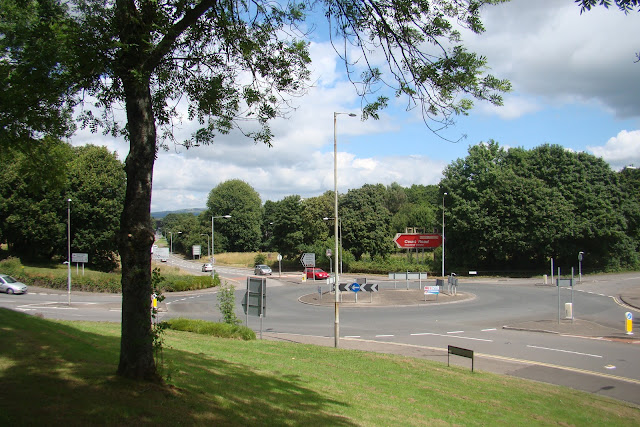 Across the roundabout a remnant field, crossed by the embankment of a disused railway line, also contains a hollow which may have been the line of the stream bounding the territory of the two granges. 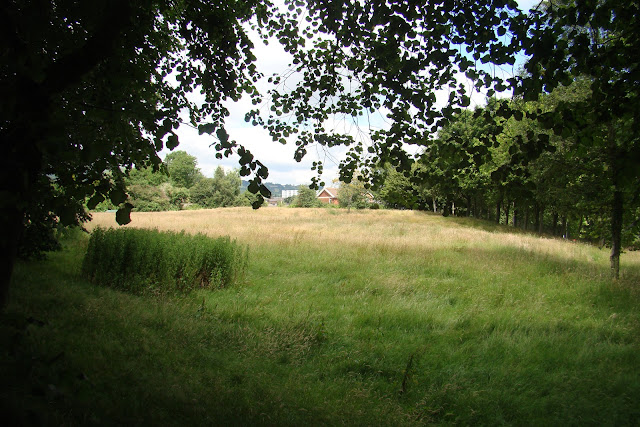 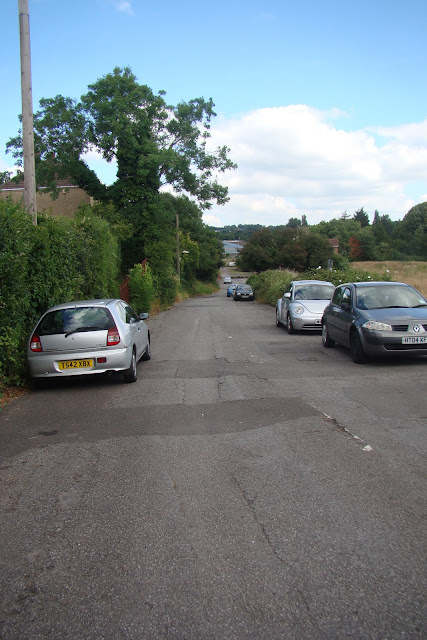 The old track up to Gelli-las (still called Grange Road) is passed, now a residential street and service road for a supermarket and industrial units. Approaching the centre of Old Cwmbran, the small industrial settlement that preceded the new town and the housing stock becomes a mix of mid-nineteenth century cottages and late century worker’s terraces; the area now somewhat down at heal.

As the post-war trunk road into the centre of the town is bridged the old road curves westwards and climbs up the small hillock on which the medieval chapel of St. Dial’s, a stopping place on the pilgrimage route to Penrhys, stood. As the hill is climbed the character of the route changes, St. Dial’s Lane, bounded by an old wall and then hedge-lined, is now lined by fields: a rural snapshot amidst the urban new town. From a field containing a ruined barn, the site of Llanderfel pilgrimage chapel and the surrounding grange can be seen high on the side of Mynydd Maen looming in the distance to the west. This low river terrace hillock provides a prominent viewpoint and landmark in the landscape, probably explaining the location of the chapel here. 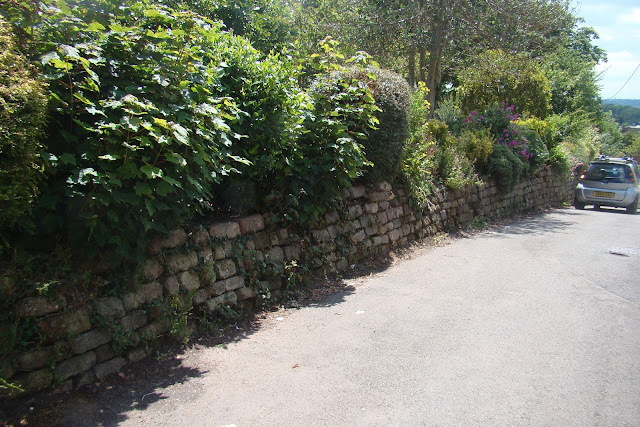 Section of old wall on lane up to St. Dial’s (Source: author). 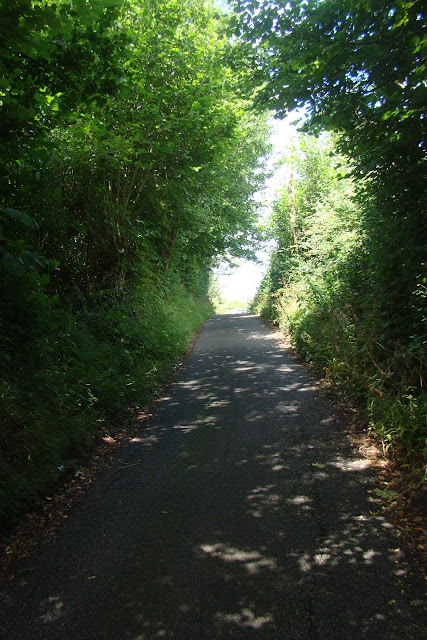 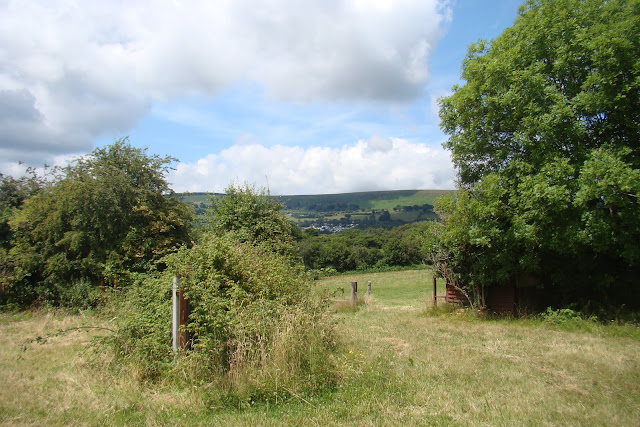 Looking west towards the uplands of Mynydd Maen towards the site of Llanderfel chapel on the distant hillside (Source: author).

The steepness of the northern slope of St. Dial’s descending to the adjacent town centre has preserved it from development. The jumble of post-war buildings forming central Cwmbran, complete with distressed concrete multi-story car park and landmark tower block, now overlie the grange farm of Gelli-las. 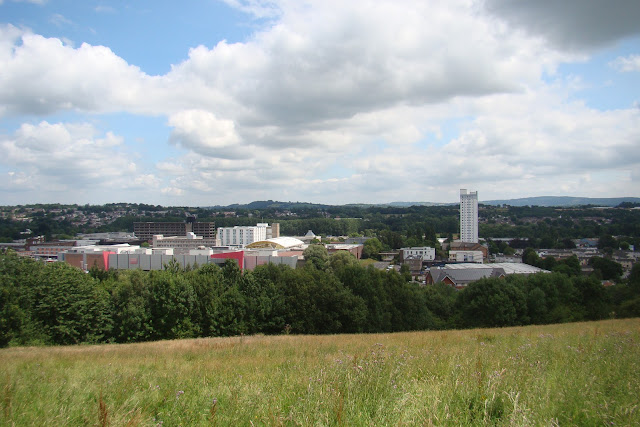 Central Cwmbran on the site of the Gelli-las grange (Source: author).

A further stretch of ‘country lane’ hollows below tree-lined banks. Desire paths through an overgrown field are explored, bushes and trees now reclaiming the site of the long-demolished St. Dial’s House and most probably the medieval chapel. The approximate site of the old settlement along the lane is now unremarkably taken by a small Victorian terrace and a bungalow. As the lane strikes north alongside allotments, the open space to the south is the scene of a rising housing development, part of the Cwmbran neighbourhood which takes its name from the medieval chapel. 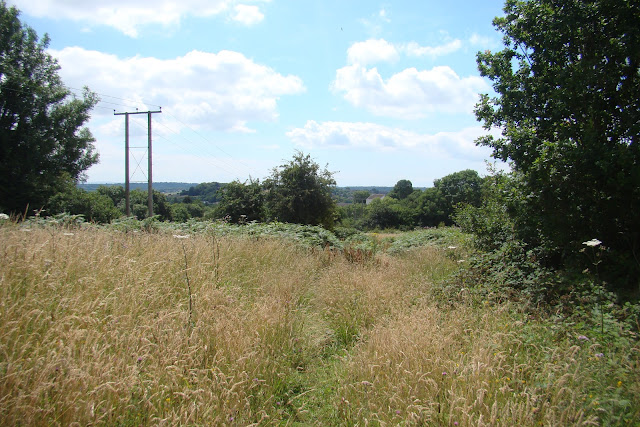 Descending from St. Dial’s, the lane runs alongside one of the modern roads through the new town to a roundabout. From here the line of the pilgrimage route continues westwards towards Llanderfel as a series of walking and cycle paths. This route will be picked up again later in the walk but now a diversion westwards through the remaining woodlands of the Freshwater suburb is followed. Here, remnant trees and dingles are intermixed with the housing of the new town, pathways running through the green spaces and linking residential areas with roads, schools and other infrastructure. The retention of significant woodland within the new town fabric is the result of a mix between idealism - the creation of the liveable, spacious neighbourhoods such as Fairwater and Greenmeadow with plenty of green areas – and pragmatism, with tree cover largely confined to the more difficult and marginal terrain alongside the courses of streams and steeper-sided gulleys. 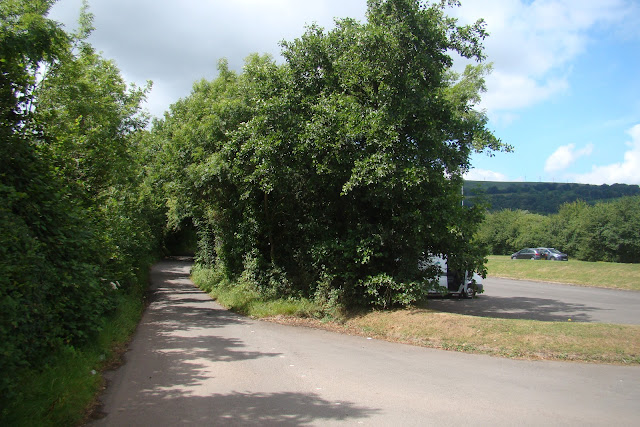 St. Dial’s Lane beside the modern road through the western suburbs of Cwmbran (Source: author). 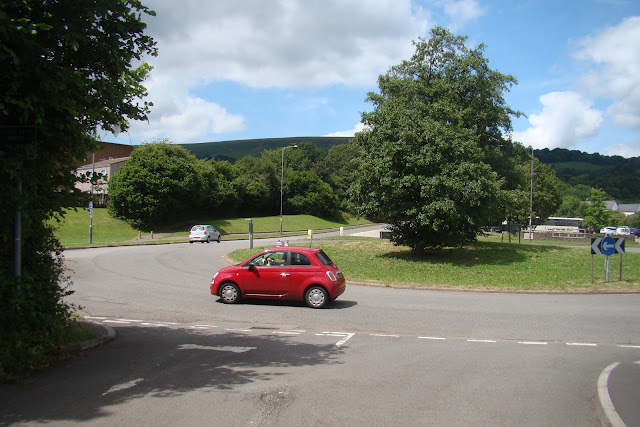 The route of the pilgrimage way picked up again via the footpath on the other side of the roundabout (Source: author). 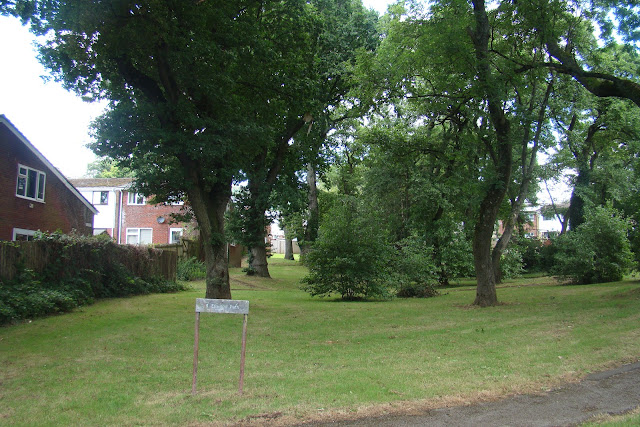 In this elevated western part of the new town, open and green prospects are juxtaposed in places with some rather tired-looking housing stock. A public footpath followed through the block of woodland below Cwmbran High School comes to a dead-end at the school gates and meandering, sometimes litter-strewn, desire paths eventually lead to the old lane - Graig Road - still zig-zagging its nineteenth century course up through Fairwater, a hidden away but still extant artery for cyclists and dog-walkers masked by suburban closes. This route would have provided a more direct route up to the open common of Mynydd Maen from the abbey, by-passing the hilltop pilgrims diversion of St. Dial’s. 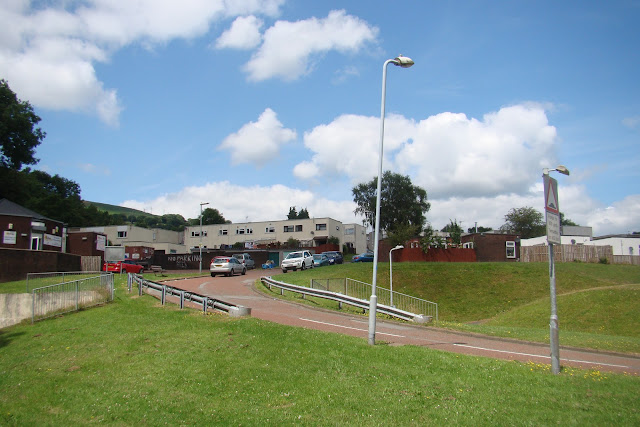 Housing in the Greenmeadow area of Cwmbran (Source: author).

Here rural tranquillity is found again as the lane crosses a stone bridge in a dingle carrying a fast-flowing stream down from the hillsides around Llanderfel. The arboreal spell somewhat broken by the litter collecting around the information board at the start of the holloway that runs uphill towards Landerfel. As the board attests, this part of the pilgrimage route is now well publicised. However, less well-known or promoted is the fact that the line of the route east from here to St. Dial’s can also be traced on the ground, preserved as a series of walkways through 1970s housing and crossed by new roads – a linear piece of history stubbornly retaining its place in the modern-day topography. 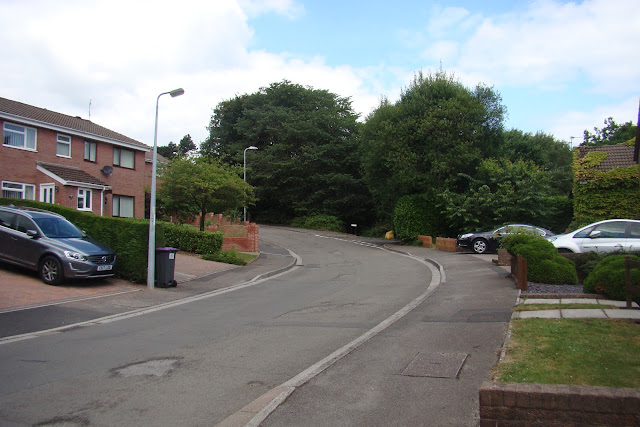 The old lane through Fairwater disappears into the trees on the curve of this residential close (Source: author). 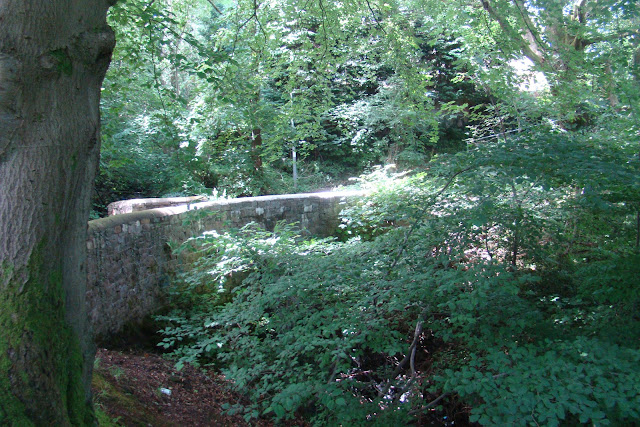 Bridge carrying the lane, hidden away behind the suburban closes (Source: author).

This route eastwards and downhill, back towards the centre of town, is now followed. A footpath, sometimes following sections of well-worn holloway flanked by the mature remnants of out-grown beech hedges, at others the memory of the old track is only preserved by a line of trees or a depression alongside the tarmac path. 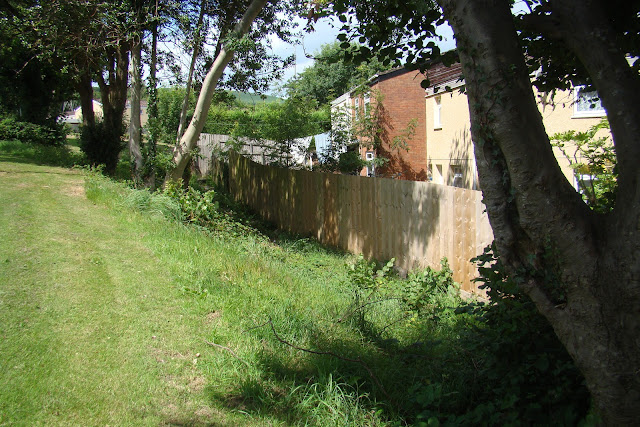 The line of the pilgrim route from St. Dial’s to Llanderfel, now a hollow line behind garden fences (Source: author). 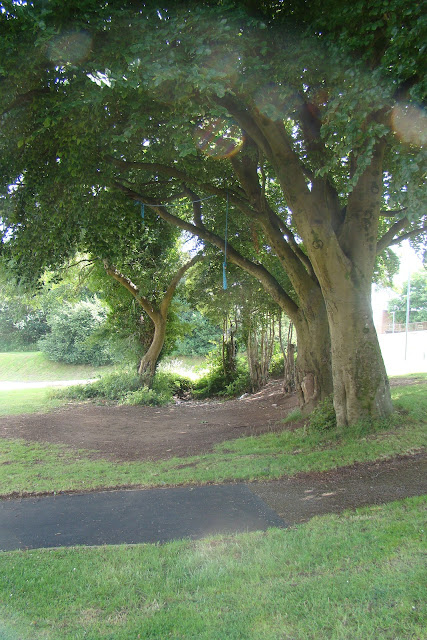 A further section of the track, preserved as a line of trees (Source: author). 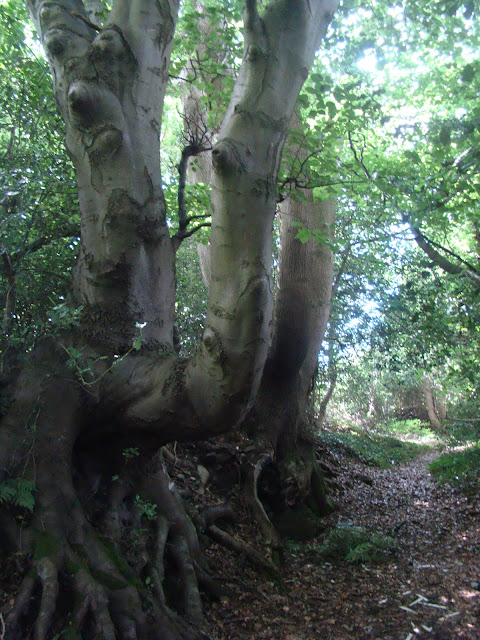 A more well-defined section of the track, lined by beech (Source: author).

Crossing a busy through road, a further piece of rural history within the contemporary townscape is observed: Greenmeadow ‘community farm’, its farmhouse partly dating to the seventeenth century, home to post-medieval tenants of the Magna Porta manor and perhaps their monastic period predecessors. A public footpath traverses the perimeter of the farm leading into steep woods shielding the noise and grime of the large central industrial zone of Forge Hammer, previously the site of railway yards and a nut and bolt works. Emerging from the woods, an oasis of grass in the form of a large oval pasture (preserving the shape of a prominent enclosure alongside Church Wood as recorded on the 1887 Ordnance Survey map) is walked through. 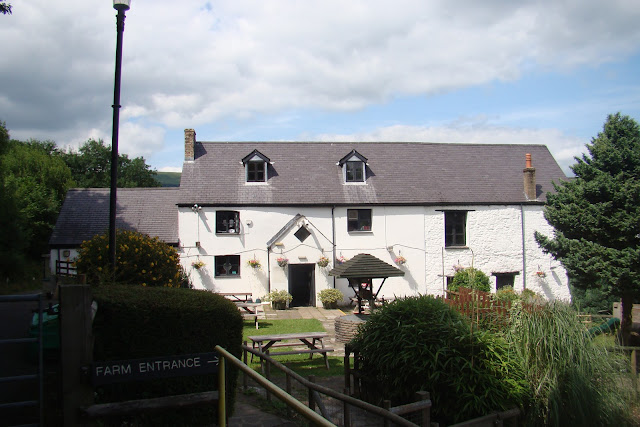 Hard by the industrial estates, the valley of the Cwm Bran Brook holds a nature reserve along a series of silted-up and wildlife diverse industrial ponds and weirs. Yet another quiet semi-natural place in close proximity to the busy urban apex. 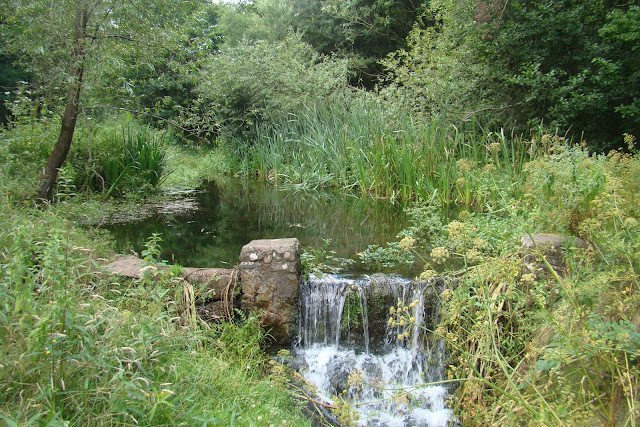 Leaving the stream, the walk strikes north along the towpath of the Pontypool to Newport canal towards the northern-most part of the abbey’s Magna Porta lands at Pontnewydd, the gently rising section here lined by a series of deep locks. The canal dissects the manor from north to south, the precursor to later further linear communications routes in the form of railways and roads. 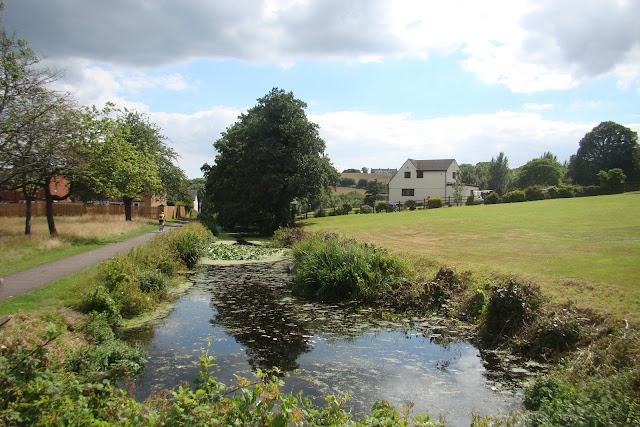 From the canal the route runs through the centre of the industrial village of Pontnewydd, later part of the northern suburbs of Cwmbran and named for a crossing over the Afon Lwyd dating from at least the seventeenth century, now marked by a nineteenth century bridge. Looping southwards having crossed the river, the site of the Gelli-las grange farmstead is now approached. Along the riverside some of the grange’s water meadows are preserved as sports fields. Surrounded by roads, a multiplex cinema, a multi-story car park and a supermarket, can be found, somewhat incongruously, the Llantarnam Grange Arts Centre, housed in the nineteenth century upgrade of the old farmhouse of Gelli-las (which took the name of Llantarnam Grange) and standing in the remains of the ornamental gardens surrounding the house. Although it is hard to get a sense of a medieval agricultural estate in this setting and on the long walk back down Llantarnam Road, it is at least reassuring to know that this particular grange farm has an on-going and distinct afterlife having so nearly been demolished in the 1960s. 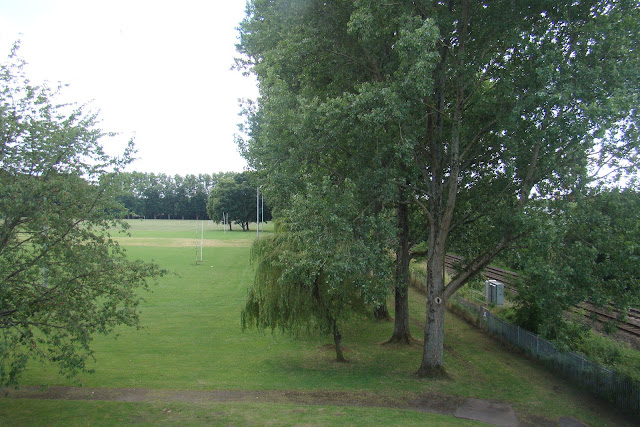 Sports fields occupying some of the water meadows of Gelli-las grange between the Afon Lwyd and the railway line (Source: author). 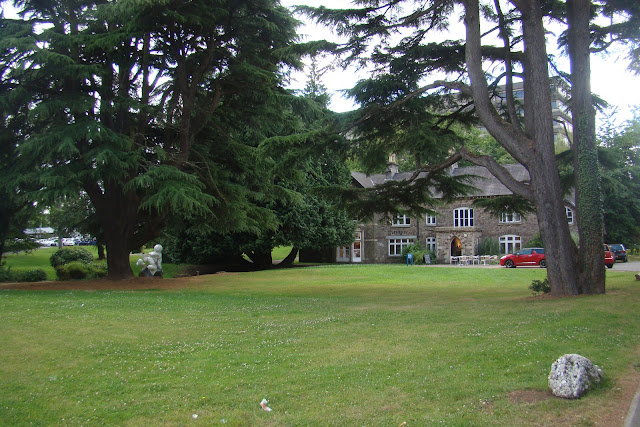