Landscape in Particular: The Uffington White Horse and Wayland's Smithy 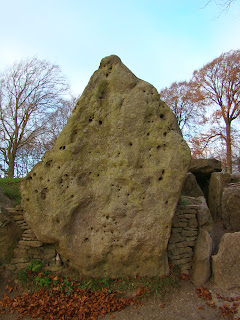 "I write with very cold hands, the White Horse twenty to thirty yards below me to my right ... and the sun breaks through suddenly and warms my aching soul. Long shadows across the man-made fortifications below - long shadows and a Blakean arc of rays cuts the cold and draws me into its eternal glow ... Earthworks abound and I cannot help but scan the horizon ... The shadows lengthen and more peace ... White chalk routes cut these hills and stalk out this endless greenery. Greenery. Ha, ha! A delirious man awake and awash in a sea of green."

So reads Julian Cope's entry for Uffington White Horse in his survey of the sites of Megalithic Britain, The Modern Antiquarian; and I share Cope's cold hands and sense of awakeness as I view the same scene on a day of equally long shadows and arcing sunlight. My time would be spent on the wild downland overlooking the Vale of the White Horse, encompassing the historic boundaries between Berkshire, Oxfordshire and Wiltshire and presenting a curious mix of the pastoral and the functional in the form of the sprawl of Swindon, the mainline railway from London to Wales and the West Country, and the RAF air bases of Fairford and Brize Norton. The 'thud, thud, thud' of Sea King helicopters from the latter would regularly punctuate the day's soundscape; with the title track from PJ Harvey's 2007 album, White Chalk, providing the more appealing counterpoint pulsing through my thoughts.


"High on a hilltop wind-swept site: the pagan horse in chalk scratched white." Opening line from a framed poem in All Saint's Church, Woolstone.

The Uffington White Horse is a well known and highly stylised landscape symbol, its singularity undimmed by familiarity (and now seemingly reproduced in Mexico). Although widely acknowledged as probably the most ancient of the numerous hill-figures across the high ground of Wessex, there are various theories about its origins. From folklore we have the story that the horse was carved to celebrate King Alfred's victory over the Danes at the Battle of Ashdown in 871, believed to have taken place locally. However, excavated silt analysed in the 1990s was dated to the first millennium BC. This evidence would support the view that the figure is in fact a tribal emblem carved during the Iron Age as a territorial indicator, probably by the Dobunni tribe of this region. More fanciful theories have positioned the horse as a fertility symbol or star marker, designed to be viewed from the heavens rather than from below. Commanding the heights above the chalk-cut horse, and adjacent to the passing Ridgeway path, is Uffington Castle, an Iron Age hillfort dating from the 7th century BC. A carnival and fair was traditionally held within its bounds during the scouring undertaken every seven years to renew the chalk. 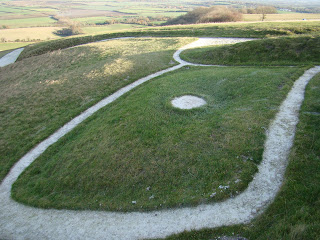 Close-up the lines of the iconic chalk figure take on the strangely mundane appearance of golf course bunkers. Treading the curving white paths of the horse I made my way down slope and then up to Dragon Hill, a natural chalk outlier of the main ridge artificially levelled to give a distinctive flat-topped appearance. The hill is named for the local legend that St George here slew the dragon. It is said that nothing has ever grown on a bare patch on the summit where the dragon's blood was spilt. A fascinating fiction.

The Manger is the name given to the steep-sided natural amphitheatre that forms the head of the dry valley below White Horse hill. In many ways this is the most intriguing element of the area's topography. Dropping into its depths, one is shadowed not only from the brightness of the low winter sun but also the surrounding ambient noise on this thin-aired day. Looking back up to the horse figure and hillfort this would seem the most dramatic way up to the monuments, and its easy to imagine this as a processional route designed to maximise climactic impact. Its also noticeable that here the natural morphology of one side of the valley gives it a distinctive whale-backed pattern, like a row of prehistoric long barrows. This use of natural features in the landscape to frame or influence prehistoric practices and monumental architecture, even to provide design inspiration, is fascinatingly investigated in Richard Bradley's An Archaeology of Natural Places. 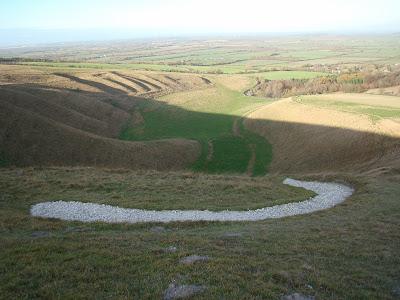 Looking up from within The Manger the horse is visible just below the ridge line, but a discussion with a National Trust Warden fixing fence posts reveals that it may have had an even more striking appearance from this vantage point. It is thought that the figure was considerably larger in the past and faint lines in the slope just below the current position may indicate that the legs were once much longer. Whether this is true or not, it seems much more plausible that the figure was designed to be seen by the human-eye from below, and from miles around, rather than a monument to be viewed from the air by the gods. The Warden also confirmed that the scouring to keep the figure white and clear of overgrowth is still regularly undertaken, though now using volunteers from far and wide rather than local villagers (who it seems were anyway somewhat press-ganged into the work by the Craven Estate, the big local landowner and employer). 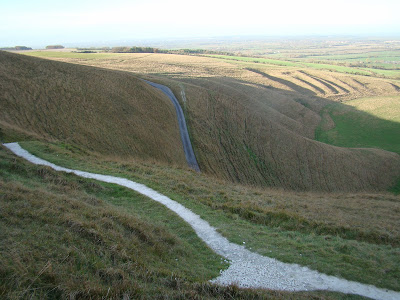 After lunch - perhaps inevitably at The White Horse pub in nearby Woolstone (the village an amalgam of thatch, yew tree, woodsmoke and tasteful Farrow & Ball paint) - I made my way back up to the ridge via a sunken green lane. On the way passing Handwell Camp, another hillfort, its immense banks and ditches hidden in woodland and intriguingly cut into the scarp slope rather than occupying the top of the ridge as is more common. Having walked past the body of a dead roe fawn, my ascent was accompanied by something of a surge in wildlife, as I passed a number of deer scrapes and badger sets and observed a large flock of wood pigeons and several red kite, patrolling the thermals.


Cresting a ridge always provides the excitement of entering a new realm, steep slopes forming a liminal border that millennia of human activity cannot alter. At this time of year the seemingly endless undulating high country of the North Wessex Downs that now come into view to the south is a sea of brown, russet, orange and fading green; bringing to mind the chalkland landscapes of Eric Ravilious. Encouraged to linger in my gaze by the day's sharp light I ruminate on the fact that the current topographical scene is largely a construct of the enclosure and agricultural improvement of the last two centuries or so. The monuments that pepper theses uplands would have been born into surroundings dominated by open grassland, no doubt with patches of woodland much less orderly than the angular shelter-beds, breaks and copses seen today. The question of what is an authentic landscape is however a futile and unnecessary one. In any case, much of what we see is mere surface dressing, covering the unchanging - at least in timescales that we can comprehend - natural morphology. The lines of the land catch your eye whatever transient topographical cloak they are currently wearing. 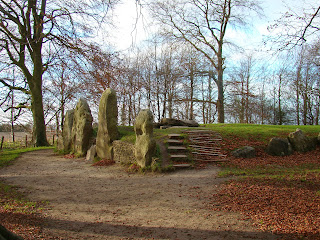 My final stopping point of the day is Wayland's Smithy, a Neolithic long barrow a few metres from the Ridgeway and a mile and a half west of the Uffington monuments. Six huge sarsen slabs formed the facade of the mound (now partially reconstructed), which then tapers out over its length of 55 metres. A cruciform chamber at the entrance can still be entered. When the interior was excavated in 1919 the remains of at least eight people were found. Later archaeological investigation revealed more human remains and that the barrow was built on top of an even earlier structure. The name given to the barrow is an example of the awe in which later waves of civilisations held such monuments, to them the work surely of gods or giants. In this case the Anglo-Saxon god Wayland or Weland. Local legend has it that an invisible smith lived in the chamber, known as The Cave, and if a horse were left at the entrance with a penny it would be shod when the owner returned. This may be a case of folkloric confusion - perhaps linking the monument with the nearby white horse - as Weland was a swordsmith and armourer in English and Norse mythology (the maker of Beowulf's chain mail) not a blacksmith.

The barrow is encased by an oval of beech, bristling in the wind. Although a relatively new addition to the scene - such high-status burial mounds were designed to be clearly visible - the trees somehow seem to frame the monument in a fitting way. This is now a place for tranquil contemplation rather than supernatural blacksmithery. 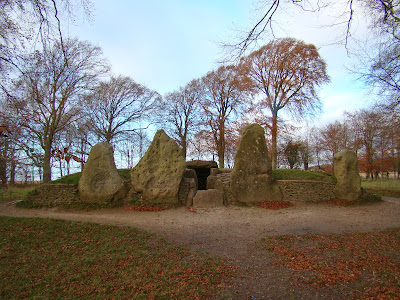 The return to my starting point followed the Ridgeway; the miles on view in each direction, aptly described by R. Hippisley Cox in The Green Roads of England as "a spreading view of middle England", dramatically lit as the day prepared for dusk. This now modest track is the Ur-superhighway of southern England, traversing the high ground of the Wiltshire and Berkshire Downs and the Chilterns for nearly 100 miles. The hillforts, barrows and other prehistoric structures along its route speaking not only of its antiquity but also the huge span of time during which it remained as an important communication route, before the network of roads we use today emerged during the medieval period to render it a backwater byway.

On reaching the summit of White Horse Hill once more, a celestial vision met my gaze: Didcot Power Station bathed in a shaft of winter sunshine, like a frame from Patrick Keiller's (Oxfordshire set) Robinson in Ruins. A fitting end to a day of, in the words of Swindonian Andy Patridge, senses working overtime. 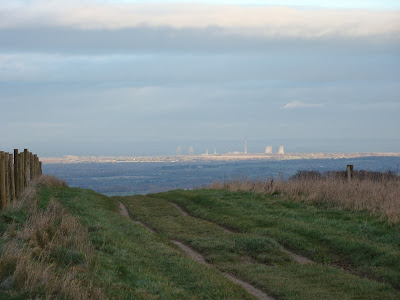 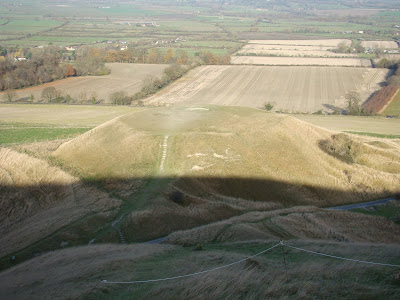 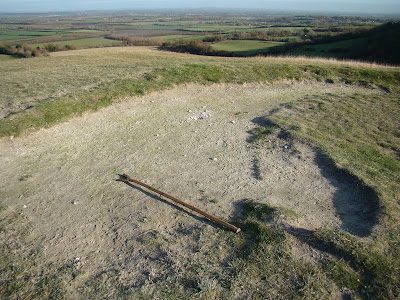 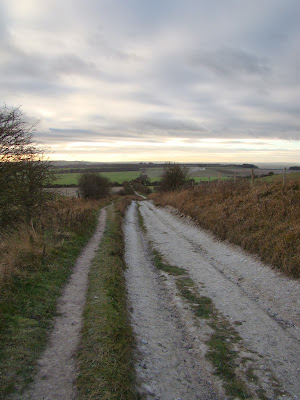 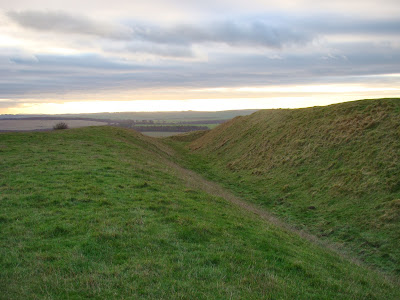 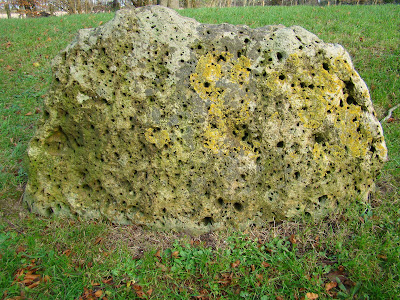 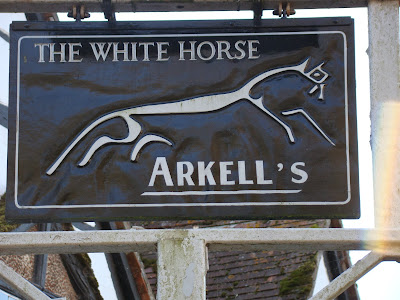 This is the latest in a regular-occasional series of posts on specific landscapes and places that are particularly meaningful to me, for whatever reason; after all, interest in the topographical is nothing without a feeling for sense of place: genius loci.

Conduit, B, 1997. Somerset, Wiltshire and the Mendips Walks. Jarrold.