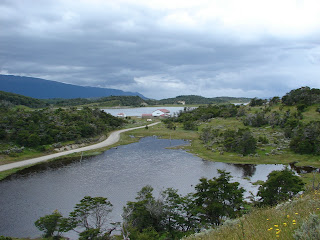 Several years ago my partner Lisa and I spent a month criss-crossing the towering wonder of the Andes of Chile and Argentina; a Patagonian odyssey of the sublime and the superlative. In the midst of all this epic-ness my memory reserves a special place for an altogether more temperate landscape, that of Harberton in Argentinian Tierra del Fuego. This tiny settlement and gentle farm-scape occupies a narrow peninsula that nudges into the cold, wind-whipped Beagle Channel; a plain-speaking and modest interloper amidst the drama of the world's southern-most settled terrain. Head south and Cape Horn and Antarctica await.

Harberton is the oldest estancia (rural estate or ranch) in Tierra del Fuego, established as a sheep farm by an English misionary from Bristol, Thomas Bridges, in 1886. This was a period when the vast lands of Patagonia were opened up to sheep farmers from England and Scotland to become, for a time, one of the largest wool producing regions in the world. The settlement is named after the Devon home village of Bridges wife Mary ('Farmstead on the river Harbourne', an Old English river name meaning 'pleasant stream'). The distinctive white corrugated iron, red roofed farmstead that still stands today was prefabricated by Mary's father in England, shipped over and assembled at a sheltered spot chosen by indigenous Indians of the local Yamana tribe. With an empathy unusual for the time, Bridges devoted the last 30 years of his life to living amongst the Yamana people and compiling a dictionary of their language, with a sideline in rescuing shipwreck survivors, and was granted the land at Harberton by President Roca in recognition of his work. 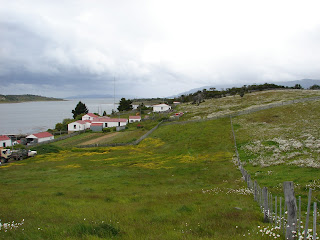 Intrigued by the guidebook description, we took a bus trip from the provisional capital of Ushuaia; a tedious and interminable drive on a poorly maintained side road from the main highway. Released from the stuffiness of the bus we found ourselves, after weeks of Andean terra incognita, in a strangely familiar place. Bruce Chatwin also visited, and described this discovery of the known in his classic In Patagonia:

"Coming into Harberton from the land side, you could mistake it for a big estate in the Scottish Highlands, with its steep fences, sturdy gates and peat-brown trout streams. The Rev Thomas Bridge's settlement was strung out along the west shore of Harberton Inlet, shielded from the gales by a low hill ... The house, imported long ago from England, was of corrugated iron, painted white, with green windows and a soft red roof ... The flowers of an English garden seemed to glow with an inner brilliance. A path led through a wicket gate arched with a whale jaw. Woodsmoke drifted over the black water, on the far shore, geese were calling." 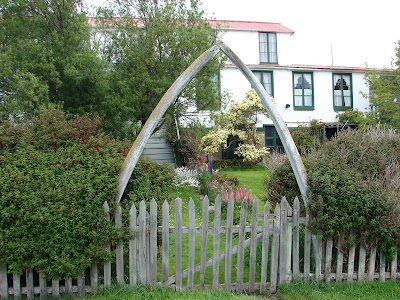 And this is exactly the scene that we found. A serene piece of England transported to the far end of the earth; a National Trust tea room would not have been out of place amongst the well kept shrubs and cottage garden borders. South America seems to specialise in this type of liminality; isolated remnants of transplanted northern European material and psychological culture incorporated into the predominant and home-grown Latin American hegemony: German style houses throughout rural Chile; Welsh enclaves in Patagonia; English country clubs and polo in the prosperous hinterlands of Buenos Aires; the Falklands, a Hebridean outlier garrisoned by red, white and blue. 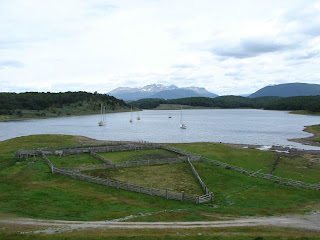 Approaching the farmhouse we observed a tall, slim man, white haired and bearded, in denim dungarees. Visually he was as familiar as the English buildings and landscape around him, but he was in conversation in the easy Spanish of a native speaker. This I took to be Thomas Goodall, the great grandson of the founder of the farm, who still works the land today. In his cultural history of Patagonia, and spefically in relation to the old sheep rearing areas, Chris Moss observes that "Englishness has been preserved in people's faces, and in surnames". We then spent several slow hours wandering the lush greeness of the peninsula, the land meshed together by sheep folds and enclosures of wood and stone, accompanied by a warming breeze and ever-present bird song. The distant views seawards and southwards to the harsh mountains of Chile's Isla Navarino seemed, and not just administratively, to occupy another country; sentinals of malevolence biding their time, like circling behemoths. 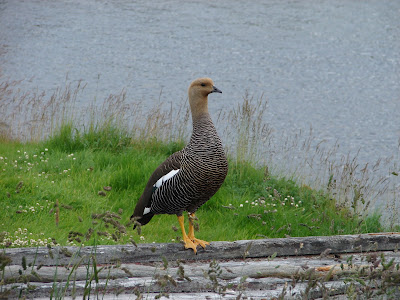 Thomas Bridge's son, Lucas, 'went native' amongst the Yamana and used Harberton as a refuge for the dwindling numbers of indigenous speakers during the aggressive colonialism of late nineteenth and early twentieth century Argentina. He wrote a thrillingly titled memoir Uttermost Part of the Earth (1947) that I would love to find a copy of; perhaps to read on a visit to the soft green hills of Harberton, south of Totnes in deep England, busy and prosperous in the fifteenth century but now a quiet backwater, and be transported again to this facsimile dreamscape in the 'land of fire', 8,000 miles distant. 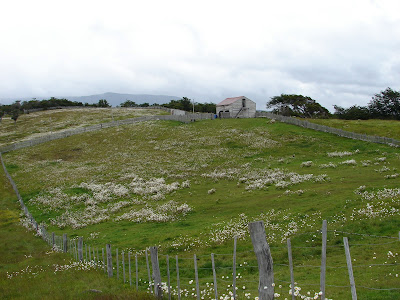 This is the latest in a regular-occasional series of posts on specific landscapes and places that are particularly meaningful to me, for whatever reason; after all, interest in the topographical is nothing without a feeling for sense of place: genius loci.
Previous 'Landscape in particular' posts:
Hergest Ridge
Worth Valley
Cold Ashton
Kenilworth Castle
Bolton Abbey