A triptych of ruins, carved into the landscape


"Red Castle, in Welsh Castell-coch, was a small manor at the lower end of the Hattrel Hill above Tre-wyn. I have failed to find any court rolls or details of this manor. A cottage on the mountain above Tre-wyn is called The Castle." (Bradney, A History of Monmouthshire, 1907).

Knocking around tumbledown ruins on steep and exposed hillsides in all weathers may not be everyone's idea of a good time but it works for me.

"Splendid this rampart is, though fate destroyed it
...tumbled are the towers,
Ruined the roofs, and broken the barred gate,
Frost in the plaster, all the ceilings gape,
Torn and collapsed and eaten by age..."
The Ruin (Anonymous)

In researching the landscape around Llanthony Priory over recent years I have been particularly drawn to three ruined upland farmsteads and enclosures that may, or may not, have had a common relationship with the Priory during its 400 year period of activity up to Dissolution in 1538:

The hypothesis that I am exploring is whether the sites were all granges, forming a key element of the agricultural infrastructure of the Priory. Granges were newly established outlying farming complexes set up by monastic houses outside of the traditional manorial system to exploit waste and other lands newly brought into economic use and worked by conversi (lay brothers). They tended to have a lasting impact on the landscape because they were “…often higher and more remote than ordinary settlements of the same period and so maintained a frontier of relatively intensive land use” (Simmons, 2001).

The Priory managed approximately 20,000 acres of land locally in the Monmouthshire/Herefordshire borderlands, including large tracts of upland moorland 'waste', known as the Honddu Slade estate. The primary documentary sources for the estates of Llanthony do not specifically identify any granges here, although they are in evidence in the Priory’s extensive Irish estates. The study of monastic granges tends to focus on the Cistercians who developed the model, which was then taken up by other orders although rarely recorded for Augustinian houses such as Llanthony. Where granges have been associated with Augustinian monasteries they have tended to be relatively close to the house, reflecting the order’s limited use of lay brethren and the need for the canons to run the farm themselves. 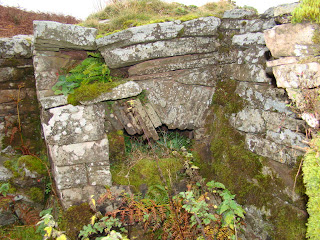 My aim has been to explore the physical landscape evidence, so far through some preliminary fieldwork; compare the 'patterns of the past' found here with known grange sites connected to other monastic houses, and, if my hunches seem to have any credence, revisit the documentary records.


Redcastle is an enigmatic historical footnote, no longer extant as a named place in recent centuries. First recorded in 1279 as Rubro Castro, it is categorised as a manor, rectory and church in the list of the Priory’s holdings at Dissolution. However, Bradney's methodical early 20th century antiquarianism was unable to find any court rolls or details of this small manor and there is no documentary evidence of the actual location of the church and other manorial features.

One explanation for this lack of evidence may be that Redcastle was in fact more akin to a subsidiary grange for sheep, cattle or horse rearing, which all formed an important part of the Priory’s economy. The postulated general location for the manor in the area around Upper and Lower Pentwyn, high up on a south-facing spur of Hatterrall Hill in an area of small irregular fields with direct access to the open moorland would support this theory. A dwelling and enclosure  on the ridge, now ruined, is recorded on the Ordnance Survey first edition map as The Castle and the particulars of sale of the Trewyn estate in 1775, recorded a Castle on top of the hill. 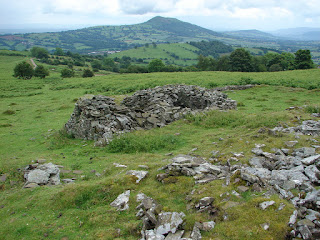 The English name (unusual for the area and with no recorded Welsh version) would support a new farmstead established by the canons of the Priory, the secure location high up on the ridge perhaps also pointing to a frontier settlement. The extensive ruins lie in a sheltered and south-facing location below the higher ridge and are grouped around a spring, standing in a large embanked rectilinear enclosure, lined in parts by a ditch. The main ridgeway to and from Llanthony runs directly past the enclosure and it is adjacent to a prominent system of small curvilinear fields that have a markedly different morphology to those in the wider surrounding area. 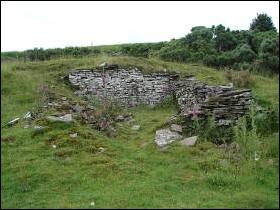 A small chapel for lay brothers was a common feature of grange sites and so the recorded church may have been located within The Castle complex. Alternatively, a ruined building built into the hillside in a small circular enclosure next to the nearby Yew Tree Cottage, may be another possible location.

The site of a second possible grange is located in the upper part of the adjacent Olchon valley. The 1840 tithe map for the Township of Llanveynoe records an area of small oval shaped enclosures in the upper part of the valley with the name The Old Abbey. This field system has a different character to the more rectilinear field patterns that dominate the enclosed hillside along the rest of the valley, perhaps indicating an earlier medieval origin associated with the operation of a grange. Olchon is recorded as paying tithes to the Priory, although the lack of any clear primary reference to a grange is problematic. 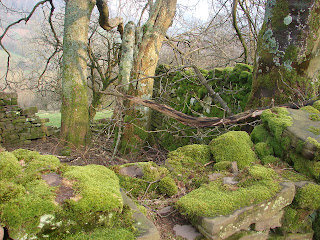 The potential grange site, high up on the valley side, consists of a network of ruined buildings located within the bounds of The Old Abbey enclosure, which have been surveyed by Herefordshire Archaeology as part of the Olchon Valley Project. Grange complexes typically consisted of extensive areas of banked and ditched enclosures, barns, animal crofts, domestic quarters and often a small chapel. The scale and form of the relict features at Olchon would support such an infrastructure. The location at the head of the valley with access to exploit extensive open grazing as well as pasture is a typical one for a monastic grange operating as a bercaria (sheep station) or a vaccaria (cattle ranch).

A trackway that is no longer recorded on the map or easily traceable on the steep ground, but clearly visible as two parallel and deeply incised hollows in aerial photos, leads from the complex and follows a dog-leg course over the ridge to join the main routeway giving access to Llanthony in the next valley. The trackway that runs down slope from the site gives access to Oldcastle, Clodock and other locations associated with the Priory.

View looking SW from the head of the Olchon valley. The grange site and Old Abbey enclosure occupy the fields circled in the foreground, with the dog-leg track over the ridge to Llanthony also highlighted climbing the hillside above (Photograph supplied by Herefordshire Archaeology and annotated in MapInfo). 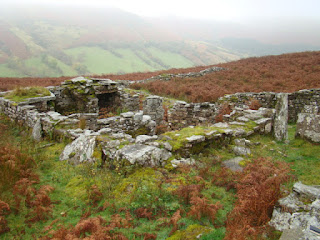 The third location in this triptych, carved into the landscape, is also named The Castle, and has a strikingly similar morphology to the site of the same name already described. High-up on the hillside, submerged in bracken and gorse, the large sub-divided stone wall on earth bank enclosure and ruined buildings are invisible from the main valley road but can be clearly traced from the top of the ridge on either side. 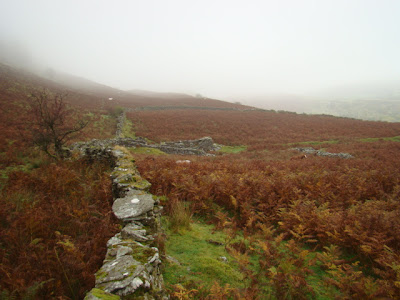 However, no documentary evidence so far links this site with the Priory. In fact, it stands in the wild upper part of the valley, north of the long-standing boundary that delineates not only the perimeter of the monastic estate but also the historic county of Monmouthshire. Administrative boundaries were, though, more fluid in medieval times, especially in a border region such as the Welsh Marches; establishing a grange to exploit the grazing land at the head of the valley, just a few miles from the Priory, would make economic sense to the enterprising Canons of Llanthony.

Alternative theories could be provided to explain the origins of the three farmsteads. They may have originated as hafods, seasonal summer dwellings utilised whilst cattle or sheep grazed on the rich upland pasture, that later became independent farm units during the period of colonisation of waste and wooded lands in the fifteenth century as the traditional system of transhumance broke down in the early post-medieval period. Or be the result of more piecemeal encroachment into marginal land resulting from the intake conversion of open common into pasture during a period of agricultural expansion; for instance in the warmer climate of the twelfth and thirteenth centuries, increasing population during the later medieval period or nineteenth century estate management.

More days out on the hillside required...

Leighton, David and Silvester, Robert, 2003 Upland Archaeology in the Medieval and Post-medieval Periods in Browne, David and Hughes, Stephen (Eds.) The Archaeology of the Welsh Uplands. Aberystwyth: Royal Commission on the Ancient and Historical Monuments of Wales (RCAHMW)