Voices from the well 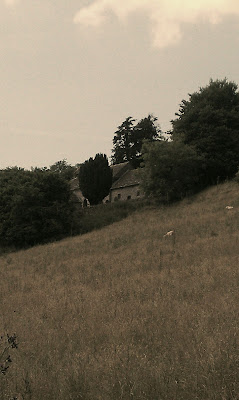 The Church of Merthyr Issui at Patricio (now Partrishow) inhabits its location high up on the western slope of the Grwyne Fawr valley in the Black Mountains as only an ancient country church can do; nestled stone, standing in calm defiance of time. Seeking shade on a day of broiling heat, the dank emptiness inside was a welcome pause from the summer uniformity of the past few weeks. Looking up and around, the glory of the archaic architecture and iconography met my gaze; a spiritual, though - for this heathen - not a religious, leap back into the Middle Ages.

The church has occupied this site since at least the eleventh century and is named for a Christian hermit, Issui, who lived in a cell in the dingle below, next to the fast flow of Nant Mair ('St Mary's stream') and a Holy Well that probably predates the church as a place of worship and pilgrimage. Springs and wells have a deep topographical relationship with places of worship: as Richard Morris points out, 'the basic meaning of the Old English wylla is spring. More than any other type of feature waeterwyllas span the transition from pagan to Christian geography'. Issui was murdered by a passing traveller who had taken rest in his cell (hence Merythr, 'martyr') and this ungrateful act led to the foundation of a church in his name; in the more florid words of P. Thoresby Jones in his 1938 Batsford guide '...to commemorate an unwholesome and officious hermit who rashly rebuked some lusty pagan prince'. 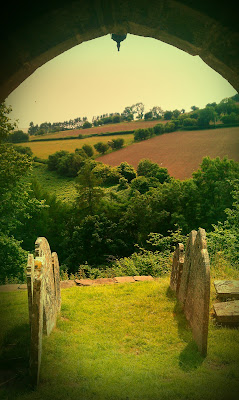 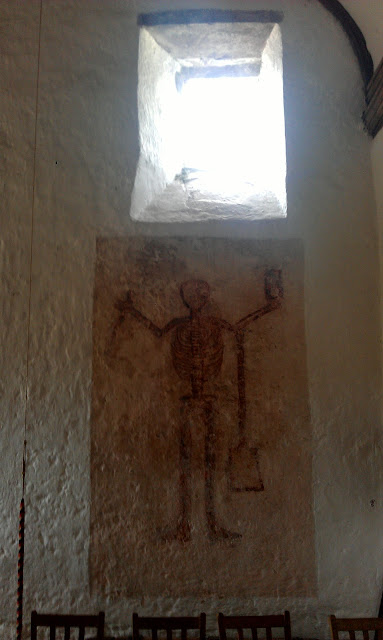 For once my interest was focused on the interior of the building rather than the landscape setting. Likely due to its remote location, the church did not suffer the same state-sanctioned vandalism as most during the Reformation and therefore retains much of its late medieval features and ambiance (P Thoresby Jones again: 'the Puritan iconoclasts failed to find it'). From my last visit I had remembered the 'doom' mural on the west wall of the Nave: the figure of 'Time' represented by a skeleton holding a scythe, hourglass and spade; presumably a subtle reminder to the parishioners as they left the service that this earthly life, and therefore time to repent for their sins, is limited. As shafts of sunlight streamed through the window above, the outstretched arms of the looming figure seemed to widen; rib bones and skull standing out in sharp relief to the white washed wall. 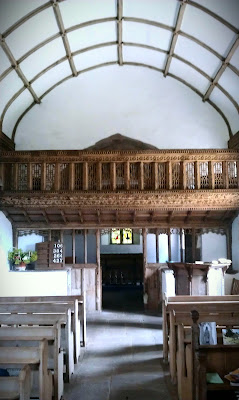 The church also retains a rare surviving rood loft, or gallery, and screen; its intricately crafted carvings, including a dragon - representing evil - consuming a vine - representing good, a common motif in the Welsh Marches. As is so often the case, the name of the highly skilled artisan who has left us this everyday masterpiece will never be known; was it the work of a local craftsman or imported skilled labour from Italy or Flanders?

I will choose less sultry weather for my next visit and explore the wider landscape surrounding the church further: the aforementioned Holy Well in the dell below, decorated with niches which once held sacred images and relics; the nearby stone bearing an incised Maltese Cross used as a waymarker for pilgrims; and the ancient bridge across the river Grwyne known as Pont Esgob (the 'Bishop's Bridge'), over which Archbishop Baldwin is said to have travelled on his way to preach at the church in 1188, on a tour of Wales to gather support for the Third Crusade (as recorded in Giraldus Cambrensis' famous Journey Through Wales).

Edward Thomas, an Anglo-Welsh son of such a landscape, captures the elegaic sense of a place seemingly now left adrift from its history in his poem The Mountain Chapel:

'Chapel and gravestone old and few
Are shrounded by a mountain fold
From sound and view
Of life. The loss of the brook's voice
Falls like a shadow. All they hear is the eternal noise
Of wind whistling in grass more shrill...
...Under the sun. When gods were young
This wind was old.'

So much to learn from the temporal repository of compelling lives and deeds behind the decoy of sleepy backwaterness; 'voices from the well'. 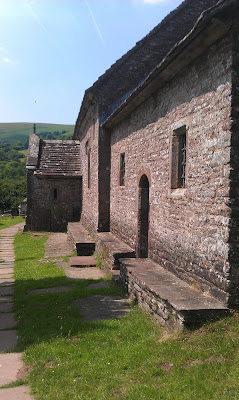 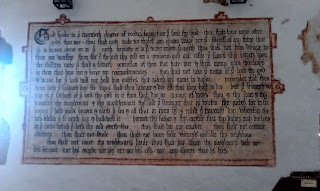 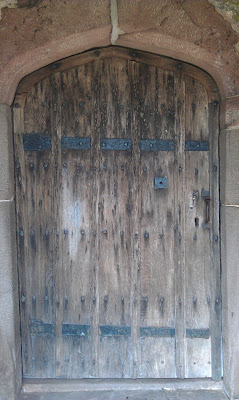 Gerald of Wales (trans. Thorpe, Lewis), 1978. The Journey Through Wales/ The Description of Wales. London: Penguin.